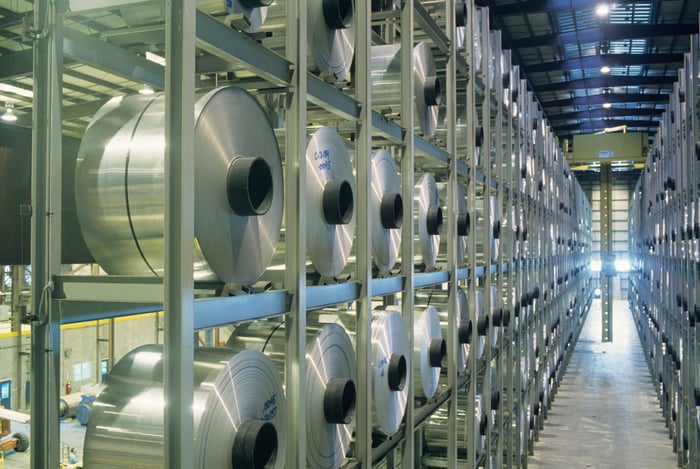 Prized for its lightness, its malleability, and its resistance to corrosion, aluminum is found everywhere -- from baseball bats and bicycles to airplanes and automobiles. It's even beating out steel in some areas, notably automobiles -- remember the Ford F-150 and its aluminum frame?

Unfortunately, times are tough for aluminum, as they are for many commodities. Overproduction, mainly from China, is to blame. Prices have fallen by more than 40% since 2011, while China has gone from being a tenth of world production to almost half. It's grim, but all is not lost for this non-ferrous metal. Here are some players who are ripe for consideration:

At the higher-margin, "downstream" end, aluminum is alloyed, extruded, drawn, or otherwise fabricated to produce engineered products so sophisticated that you may find them in the innards of aircraft engines. Keep this in mind as we consider the following players

If you think aluminum prices have hit a bottom...

If you're optimistic about aluminum prices, and fine with a bit of risk, Century Aluminum (NASDAQ:CENX) might be your best bet. Century is a pure-play upstream primary aluminum producer. It's by no means best in class, but it trades for about a 50% discount to its tangible book value, and some analysts are optimistic about its forward earnings prospects.

Everything depends, of course, on whether and when aluminum prices rebound from their currently depressed state. Until then, Century has a good chance of surviving. Although it's had three years of negative earnings in the last six years, operating cash flow has been positive in all but one of those years. Net debt is pretty reasonable at $132 million.

If safety is your main concern...

Kaiser Aluminum (NASDAQ:KALU) is pure downstream. The upstream parts of the company were divested during the years 2000-2010, and now the company supplies relatively high-margin products to customers in aerospace, auto, electronics, and equipment manufacturing. Compared to Century, it's less exposed to the ups and downs of aluminum prices.

A non-cash loss related to post-retirement obligations caused the company to post a net loss in 2015, and last quarter, its revenue was down, as well as its adjusted net income. But make no mistake, these short term difficulties are a storm that Kaiser will more-than-likely surmount. It hedges meticulously, and its balance sheet is strong -- $173 million of net debt squares up nicely to last year's EBITDA of $179 million and an equity value at current prices of about $1.5 billion.

If you like spinoffs, and you're fine with complexity...

Alcoa (NYSE:AA), at least for now, is both downstream, midstream, and upstream. It does everything. What it makes in bauxite, alumina, and aluminum, it uses internally, and what it doesn't use, it sells to third parties. The crown jewel of the enterprise is the downstream, value-added business that competes ferociously with Warren Buffett's recent acquisition, Precision Castparts. Don't take my word for it -- listen to what Precision had to say about Alcoa in its annual report.

In the Investment Cast Products segment, our principal competitor is Alcoa Inc ... We believe that Alcoa is capable of producing investment castings comparable to all but the largest and most complex of our structural investment castings. We also believe Alcoa has the financial and technical resources to produce structural castings as large and complex as those produced by us, should they decide to do so.

The value-added segment is not all aluminum. A lot of it is high-end titanium, nickel, and even stainless steel, but because aluminum is still a major cost component, it's very likely that this business will do better if it sources aluminum from the market -- where prices are very cheap -- instead of getting it internally.

In any case, the value-added business is worlds apart from the upstream business, and lumping the two together under the same management is no more ludicrous than Precision Castparts being part of U.S. Steel. A spinoff is long overdue, and it's set to happen later this year.

Before we close, let's discuss a couple of facts about this spinoff. First, it's actually the low-margin upstream business that will be spun off under the Alcoa name. The "old Alcoa," which will be the value-added business, will be renamed Arconic. Second, the CEO Klaus Kleinfeld is staying with Arconic.

Alcoa has a significant debt load -- about $9 billion in long-term debt and $5.4 billion in pension and post-retirement benefits. Most of this will go on the books of Arconic. While this is bad news for Arconic fans, some of the debt will be paid off post-split from about $900 million that post-split Alcoa will pay to Arconic. Also, Arconic is only spinning off 80.1% of Alcoa; the rest will be held by Arconic and used to pay off debt.

Alcoa is a pretty complicated case, with a lot of moving parts, and not insignificant risks. That being said, venturesome investors should definitely give this quintessential Aluminum stock a closer look.