It's hard to look at Citigroup's (NYSE:C) stock right now and deny that it's an attractive contrarian investment that could eventually yield a large return. But there are also plenty of reasons for investors to think twice about buying and holding shares of the New York-based bank.

Citigroup's shares have traced this same trajectory over the past decade. Prior to the financial crisis, they traded for a hefty premium to book value, but since the crisis, they've been priced well below the same mark. They currently trade for a 36% discount to book value. 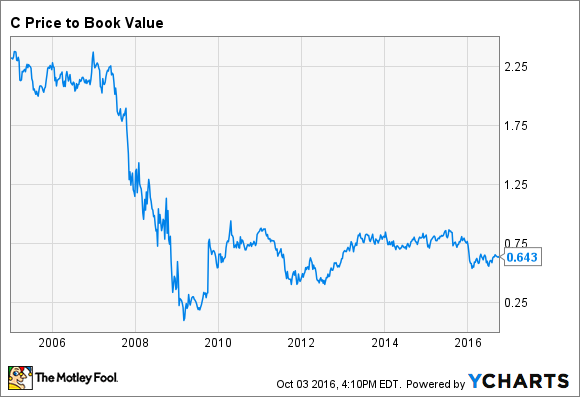 And it's not just that Citigroup's shares seem cheap on a historical basis; they come across as equally inexpensive when you compare the bank to its peers. Indeed, among the two dozen large-cap banks on the KBW Bank Index, Citigroup's shares trade for the lowest valuation. To be fair, though, runner-up Bank of America is right on Citigroup's heels in this regard. B of A's shares are priced 34% below its book value.

Just because Citigroup's shares seem cheap, however, doesn't mean that they necessarily are. A more accurate interpretation is to assume that its paltry valuation reflects the host of challenges that face banks, and the biggest ones in particular.

One that comes immediately to mind is the consequence of being labeled by regulators as one of eight U.S.-based global systemically important banks, which are subject to more stringent regulatory rules. Most importantly, G-SIBs must hold more capital than their peers in the regional banking space.

In Citigroup's case, it needs to hold 3% more of its capital in reserve than a non-G-SIB bank. This reduces Citigroup's leverage and thereby weighs on its profitability relative to other banks.

To make matters worse, two of the top banking regulators have intimated recently that they could further tighten the screws on G-SIBs in an effort to make them slim down and simplify their operations. "I think it likely that firms are going to have to change in some cases their size, in some cases their business model, and in some cases their organization," said Federal Reserve governor Daniel Tarullo earlier this year.

Tarullo's colleague, Fed governor Jerome Powell, echoed this sentiment: "I have not reached any conclusion that a particular bank needs to be broken up or anything like that," Powell said in June, as noted by The Wall Street Journal. The point is to "raise capital requirements to the point at which it becomes a question that banks have to ask themselves."

None of these threats prove that Citigroup's shares aren't a bargain, priced as they are at only 64% of the bank's book value. However, investors who seek to capitalize on what appears to be an attractive contrarian investment should do so with caution.