In his 2016 memoir Shoe Dogs, Nike (NYSE:NKE) founder Phil Knight says that when his company was still small, it looked to the then-behemoth Adidas (OTC:ADDYY) as the slow-moving giant it wanted to shake up. Nike quickly did just that. After surpassing Adidas in 1980 to become the largest sports apparel company in the U.S. by sales, Nike continued its worldwide domination over the next 35 years and is now by far the largest sports apparel company, with nearly double Adidas' total sales.

However, over the last few quarters, Nike's dominance has been threatened. Nike is still posting far higher sales than Adidas, but the growth rates are in favor of Adidas, as are the companies' stock price movements. Is Adidas' recent rise something that Nike investors should worry about, or is Nike's long-term trajectory still intact?

Adidas goes on the offensive

Something has recently changed for Adidas. After years in Nike's shadow, Adidas has kicked into high gear by shaking up its management team and working to redefine its image. This new ad from Adidas mocks Nike and others, calling them "cookie cutter" brands.

Adidas has been successful on multiple fronts in this new approach, one of which is using non-athlete celebrities like musical artists Kanye West and Pharrell Williams to market its gear. Adidas has also started to work less on sponsoring teams and more on the bigger name individual athletes driving media coverage. Denver Broncos (NFL) player Von Miller tweeted this picture of Adidas cleats co-designed by Kanye West before the Bronco's opening game in September.

In January, Adidas announced that long time CEO Herbert Hainer will be stepping down, and will be succeeded by Kasper Rorsted. Having shadowed Hainer since August, Rorsted formally stepped into the role on Oct. 1. Adidas bulls are pointing to Rorsted's experience leading the consumer brands company Henkel, where he successfully divested many of the company's non-performing segments and brands to focus only on those driving earnings growth, as well as cutting costs to boost income. Rorsted has also worked for various computer companies in the U.S., a sign that he may be able to help Adidas focus more on the U.S. market.

What has Nike investors worried

For the fiscal first quarter ended August 31, Nike reported $9.06 billion in sales, an 8% rise year over year, which was above analyst estimates. The company's EPS grew even faster to $0.73, a 9% rise year over year, though that is mostly due to a one-time tax advantage that allowed Nike to pay just 2.5% taxes for the quarter. Nike has nearly twice as much worldwide revenue as Adidas, and around nine times as much in the U.S.

What has investors worried, however, is that futures orders -- a Nike-invented system in which retailers contract in advance for future shipments of Nike gear -- were down to 7% worldwide, and just 1% in North America. Adidas' North America sales growth in the most recent quarter was nearly three times that of Nike at 22.6%, and is expected to continue growing as fast the second half of the year. Worldwide, Adidas sales grew 13% year over year, compared with Nike's 8%, and net income grew a whopping 98%.

From January 2014 to February 2016, Nike's U.S. footwear market share climbed from 48% to around 54%, but from February through August, it dropped to around 52% according to Morgan Stanley analysts. The same is true for apparel, which rose from around 30% to around 35% through February, and has since declined about 1%. Some of this fall can be attributed to the recent rebirth of Adidas.

But it's still early in the game

Nike's overall growth is likely to remain slower than Adidas' the rest of this year, and its stock could continue to be pressured. Over the last year, Nike's stock price has dropped nearly 20%, while Adidas' has more than doubled. 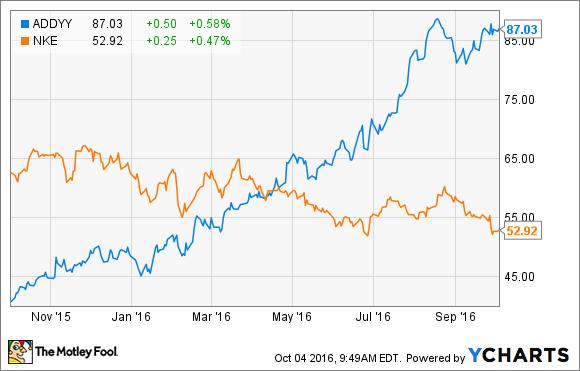 There was one bright spot in Nike's recent earnings that shouldn't be overlooked. Reported futures orders are somewhat misleading, as they don't factor in how successful Nike has been at growing its direct-to-consumer sales, particularly through Nike.com, which skyrocketed 49% year over year during the quarter. Nike expects to more than double its direct-to-consumer business by 2020 to $16 billion.

Nike's ability to fend off Adidas' growth will be important to watch in the coming quarters, but let's not forget that Adidas' last few months of success follow years of stagnation, and we have yet to see if its new CEO can continue its current growth strategy successfully. It's far too early to say that Adidas is a better long-term play.

Adidas aside, there still seems to be plenty of growth potential left for Nike, as management has stayed firm on its forecast of $50 billion in annual sales by 2020, up from the $32 billion posted in fiscal year 2016 ended May 31. It's for these reasons that Nomura analysts cut their price target on Nike from $64 to $60, but reiterated its "buy" rating on what should still be long-term gains.