Freeport-McMoRan Inc. (NYSE:FCX) continues to struggle with an ill-timed -- and expensive -- move into the oil drilling business. Barrick Gold (NYSE:GOLD) doesn't have that weight around its neck. But the fixer-upper is starting to make some progress and that makes it tough to answer the question of which is the better buy: Freeport-McMoRan Inc. or Barrick Gold.

Freeport and Barrick both mine for gold and copper; it's the core of their businesses. However, shortly before the peak of the oil market, Freeport-McMoRan decided to buy two oil and gas drilling companies, McMoRan Exploration Co. and Plains Exploration. That pushed it into a new business, which sounds like a good idea, if only oil prices hadn't begun to plummet in mid-2014.

That's been a big issue for Freeport, which took on a huge amount of debt to get those two oil deals done. Before the acquisitions, the company's debt stood at around $3.5 billion. After the deal, debt ballooned to over $20 billion, and it remained at about that level at the end of 2015. Looking at it a different way, debt was an easy-to-handle 15% or so of the capital structure before the purchases, but it was around 70% of the capital structure when this year began.

That said, a lot has changed at Freeport since the oil investment, including the company's leadership. Today, the company is looking to trim debt and get out from under what looks like a big oil mistake. It hasn't been easy, but it's making progress. For example, at the end of the second quarter, debt stood at $18.5 billion, down from nearly $20 billion at the start of the year.

Importantly, the company has managed to sell some of its oil assets. A recent deal to sell Gulf of Mexico properties will net the company another $2 billion it can use to pay down debt. In fact, the company has sold or agreed to sell around $6 billion worth of assets so far in 2016. It's clearly serious about getting its fiscal house in order.

This brings us to Barrick Gold. This miner is focused on gold and copper. With gold rallying off its early year lows, Barrick's business has begun to look a lot more prosperous. For example, it earned $0.12 a share in the second quarter, up from a loss of a penny a share in the prior-year period. The big catalyst was rising gold prices and cost-cutting efforts played a key part in that. However, that's not much different from what's going on at Freeport, which reported positive free cash flow in its mining business in the second quarter -- only it was overshadowed by the still-troubled oil business, leading to a loss of around $0.02 a share, excluding about $0.36 a share in one-time charges stemming from the oil business.

At the end of the day, both Freeport and Barrick mine for copper and gold, and those businesses look a lot better than they did at the start of the year. Only Freeport is still working itself out from under its oil business, something that's hiding the improvement in its mining operations. That helps explain why Freeport's shares have advanced less than half of Barrick's over 130% year-to-date gain. 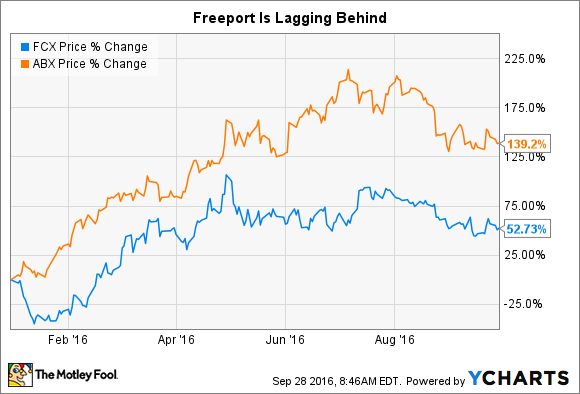 If you're looking for a clean way to invest in copper and gold, Barrick is obviously the better choice. But if you think Freeport can right the ship and get out from under the oil weight that's holding it back, it could be a diamond in the rough -- but only if you're willing to ride out the turnaround, which could be a bumpy trip. As to which is the better buy, it depends a lot on whether you see Freeport's glass as half full or half empty.