Department store stocks have been under assault in recent years due to two megatrends. First, the rise of e-commerce has left many department store chains with too many stores. Second, a shift in consumer appetites toward experiences rather than "things" has weighed on retail spending.

Nevertheless, several department store stocks look attractive now, due in part to their low valuations. I have written favorably about Nordstrom (NYSE:JWN), J.C. Penney (OTC:JCPN.Q), and Macy's (NYSE:M) in the past few months and own shares of all three companies.

However, while Nordstrom and J.C. Penney shares have plenty of upside, Macy's offers the best risk-reward trade-off right now. That has a lot to do with Macy's ongoing efforts to monetize some of its real estate assets.

Macy's stock has lost about half of its value since mid-2015, due to sliding sales at its stores. However, while the value of its stores as retail outlets has declined, the value of the underlying real estate is as high as ever. (Low interest rates have driven up real estate prices across the U.S.)

For the past year or so, Macy's has been working to extract value from some of its most valuable properties: its flagship stores in New York, Chicago, Minneapolis, and San Francisco. It may be close to its first deal. In August, Macy's revealed that it was negotiating to sell the roughly 250,000 square foot building housing its men's store in San Francisco. The selling price could be as high as $400 million-$500 million, based on recent sales of nearby buildings.

Macy's is likely to strike more big real estate deals in the next year or two. The Herald Square flagship in New York is its most valuable property, worth roughly $4 billion according to an analysis by hedge fund Starboard Value. The store has more than 2 million square feet of space, giving Macy's ample room to sell off the upper floors to a developer while maintaining a large store presence. 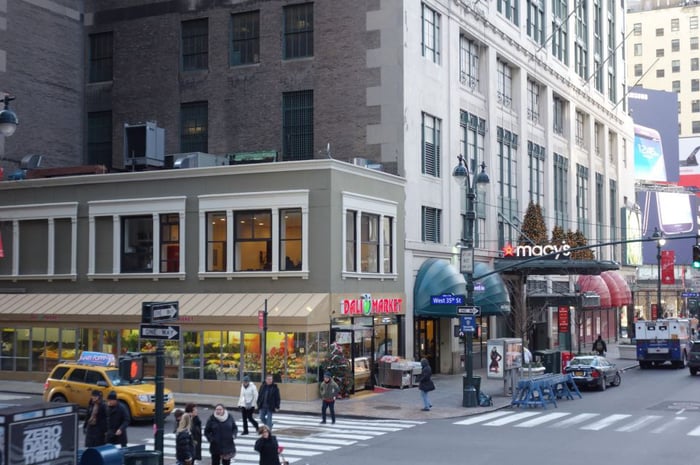 Redeveloping part of the New York flagship could thus bring in $1 billion or more. The Chicago and Minneapolis stores could fetch smaller -- but still meaningful -- sums.

Even run-of-the-mill stores are worth something. Macy's plans to close about 100 stores in early 2017. Given that Macy's owns or has a ground lease for about 70% of its stores, it could potentially bring in hundreds of millions of dollars from selling these properties -- even though it is likely some of the company's worst real estate.

While Macy's real estate value is important, it alone wouldn't justify buying the stock if the core department store business was losing money. That's not the case, though. Over the past 12 months, Macy's has generated more than $1 billion of free cash flow. It's less than Macy's had been producing a few years ago, but still very solid. 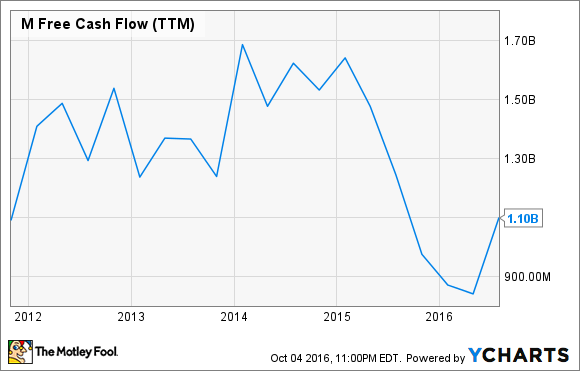 By closing nearly 15% of its stores and implementing other cost cuts, Macy's has a good chance to improve its adjusted profit margin in 2017 and beyond relative to today. With a smaller store footprint, it won't need to invest as much money on store renovations and it won't need as much inventory. That should also support free cash flow going forward.

Nordstrom and J.C. Penney: good but not the best

Nordstrom arguably has the best long-term prospects of any department store operator, due to its diversification. Today, it gets just a tad over 50% of its sales from its traditional full-line stores. Nordstrom has invested huge sums to grow its e-commerce and off-price businesses in recent years, which has weighed on profitability. 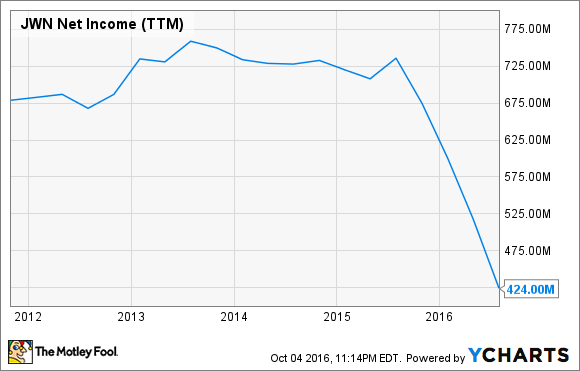 Over the next few years, those investments should start to bear fruit, driving a rebound in Nordstrom's earnings. However, Nordstrom has a lot of irons in the fire, which means it faces significant execution risk.

Meanwhile, J.C. Penney is in the midst of a remarkable comeback. Management has laid out a credible plan to boost earnings per share to $1.40-$1.55 by 2019. That would make J.C. Penney stock a bargain, based on its recent price of about $9. Yet the fact remains that J.C. Penney isn't even reliably profitable yet. An economic downturn could easily derail its turnaround.

Macy's is the winner

Investors seem to be completely ignoring the additional value attached to Macy's real estate. In the next few years, Macy's will likely realize billions of dollars from selling off real estate and can return most of that cash to shareholders. As it does so, Macy's shares should soar -- as long as the underlying retail business doesn't take a turn for the worse.