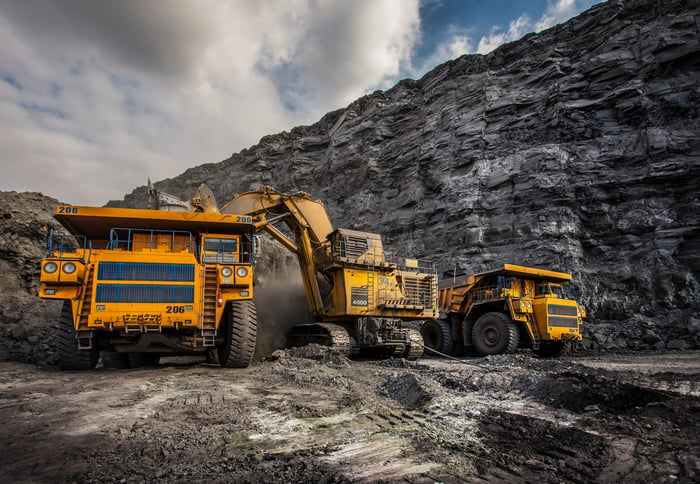 It's not every year we have a presidential election and both major-party candidates have made a point to mention coal in their stump speeches as they travel the country. The Republican candidate, Donald Trump, has gone so far as to say he'll bring back coal jobs with less regulation and better trade deals. Hillary Clinton, on the other hand, wants to continue a transition from coal to cleaner forms of energy like wind and solar. They couldn't be more different in the policies they would put in place -- something investors need to keep in mind.

But coal isn't as easy to understand as a few lines from a stump speech. It's an energy source with structural challenges that put it at odds with other forms of energy, and it's important to distinguish the political discussion surrounding coal from the reality of the industry. It's nice to talk about bringing back U.S. energy production, particularly in hard-hit regions known for coal mining. But is that really possible?

What really killed the coal industry

It's a hard truth, but the biggest reason the coal industry is in trouble in the U.S. is the growth of U.S. natural-gas production.

Natural gas is so abundant and so cheap that utilities aren't even thinking about building coal plants. In fact, coal plants are being shut down left and right because the average U.S. coal plant is over 40 years old. Since electricity generation accounts for the vast majority of coal consumption, the rise of natural gas can directly be blamed for the decline of coal.

The chart below shows how rapidly natural gas has grown and how coal consumption by power plants has declined. 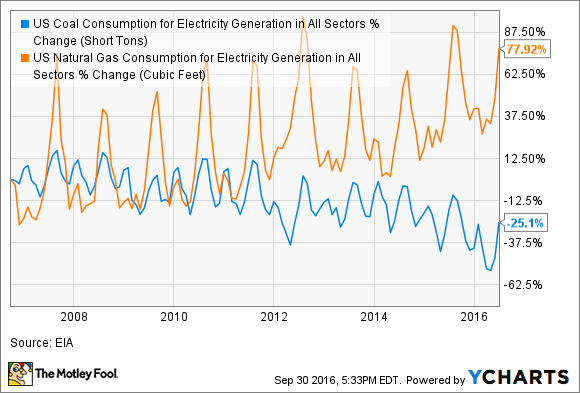 It's not likely Trump or anyone else can reverse the trend.

The challenges facing coal producers like Cloud Peak Energy (NYSE:CLD), CNX Coal Resources (NYSE:CCR), and Westmoreland Coal (NASDAQ:WLB) aren't going away anytime soon either. Coal fired power plants have been shut down across the country, including 18 GW, or 4.6% of the country's coal powered electricity capacity, shut down in 2015 alone. And the power plants can't be turned on because the president says so. Ramping up coal consumption would require the U.S. to accept a big increase in harmful emissions and higher electricity costs because of the cost to bring decades old coal power plants up to date.

Plus, a rise in coal consumption would be directly offset by a decline in natural gas consumption. And that would mean thousands of natural gas workers would find themselves out of jobs. Trading natural gas jobs for coal jobs seems like a poor trade, meaning the U.S. isn't going to drive a coal recovery without major sacrifices elsewhere in the economy.

China can save U.S. coal

The working thesis among coal companies just a few years ago was that the booming economies of China and India would have a growing demand for U.S. coal, keeping the industry afloat even if U.S. demand declined.

In the chart below you can see that the thesis of rising exports worked until 2012. But in the past four years exports of U.S. coal have dropped 65%. 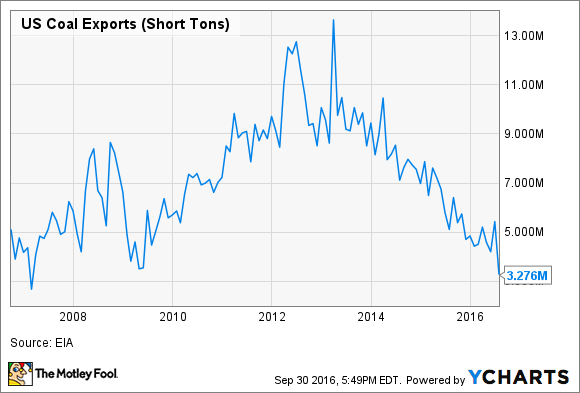 US Coal Exports data by YCharts

China and India have chosen to produce their own coal rather than import it from the U.S. and are actually starting to slow coal consumption altogether. Poor air quality in China and low cost renewable energy has caused a shift in energy from coal to cleaner sources and that's contributed to a decline in U.S. coal export.

No matter the reason countries are slowing imports of U.S. coal, they simply don't want the coal we have to offer. And that's going to keep a cap on any potential recovery in the industry.

The world is abandoning coal

The reality is that saving the coal industry would require a massive increase in domestic or international demand -- or more likely both. But there's nothing to indicate either will happen, no matter what the president does.

U.S. coal demand has suffered because of an explosion in natural gas production and there's no gain, political or economic, to ending that trend. Internationally, India and China are needed to increase coal exports and neither country has shown interest in being dependent on U.S. coal.

It's nearly impossible to see how Donald Trump, or anyone else, could save the U.S. coal industry. That's the hard truth of this former powerhouse energy source.

Not Even Donald Trump Can Save the U.S. Coal Industry @themotleyfool #stocks $CLD $WLB $CCR Next Article
Current