Shares of Cheniere Energy Partners Holdings (NYSEMKT: CQH) climbed 12.5% in September. The biggest news that spurred this price surge came at the end of the month when parent company Cheniere Energy (NYSEMKT:LNG) announced that it would buy out any outstanding shares in the company. By contrast, Wall Street wasn't too enthused with the news for Cheniere Energy as shares only climbed 1% over the same period. 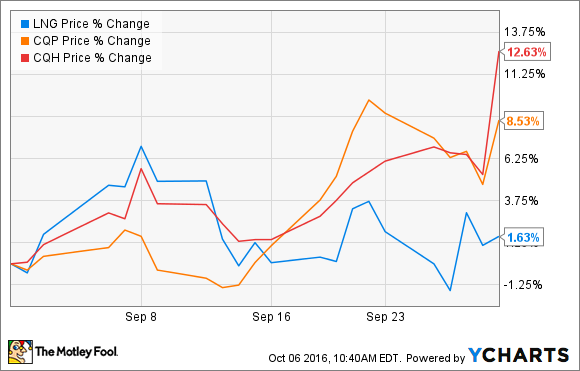 This announcement shouldn't come as much of a surprise, really. As recently as last quarter's earnings conference call, Cheniere Energy CEO Jack Fusco said that the company was looking for ways in which it could simplify its corporate structure, which was pretty much a veiled comment that Cheniere Energy Partners Holdings' days as a public entity were likely numbered.

The entity was originally advertised as a high-yield investment like its other entity Cheniere Energy Partners (NYSEMKT:CQP), but it was structured as a C Corp such that investors would pay the typical capital gains taxes instead of the income taxes associated with owning a master limited partnership. In reality, though, Cheniere Energy Partners Holdings was a way in which the company could raise cash when it was trying to finance its Sabine Pass facility without having to take on even more debt.

With founder and former CEO Charif Souki out of the picture, though, Fusco is trying to rectify some of these creative financial moves and turn the company from a fledgling company making a huge bet on America's shale revolution into a fully operational LNG exporter. It's also worth noting that Cheniere Energy already owned 80% of the shares in the entity in the first place. So this is a pretty simple fix to a very complicated corporate structure.

In the long run, this was the right move for management to make even though it seems silly to repurchase something that was spun off less than three years ago. For Cheniere Energy, it means that it will receive a greater share of the cash that Cheniere Energy Partners will generate from the Sabine Pass facility, which it can use to invest in the expansion of that facility or in its second LNG export facility in Corpus Christi.

There are still a couple questions about the corporate structure such as whether Cheniere Energy or Cheniere Energy Partners will own the Corpus Christi, but this is definitely a step in the right direction for the company and it should be of benefit to investors as these facilities get built out and revenue starts coming in the door.