Let Pfizer be Pfizer? Staying one company could be a bad move for shareholders.

Pfizer (PFE 3.59%) announced on Sept. 26 that it would remain as one company rather than split into two. The decision was made to "maximize future shareholder value creation," the company said. But could the choice to stay united end up costing investors a lot of money?

Pfizer seriously considered splitting into two publicly traded entities, with one company focused on "innovative health" (fast-growing drugs), while the other specialized in "essential health" (legacy drugs and biosimilars). The thought was that separating would release so-called "trapped value" that couldn't be achieved with all operations under one company.

How did Pfizer make its decision? It first evaluated the performance of both business units to determine if they could compete effectively as stand-alone entities. Pfizer then assessed whether there was trapped value by keeping the business units together. The company also considered if it could execute its broader strategy more effectively under the current structure or as two separate entities.

When Pfizer first began internal discussions several years ago, the deck seemed stacked in favor of splitting. But the company maintains that conditions changed over time. Maybe at one point the sum of the valuations of each part was greater than Pfizer's combined market cap, but CFO Frank D'Amelio said that's no longer the case.

Investors looking at other splits might question Pfizer's decision. The company's own spin-off of its animal health business has turned out very well for shareholders. Zoetis became a separate entity from Pfizer in early 2013. Four months later, Pfizer shareholders were given the option to swap Pfizer shares for Zoetis shares at a 7% discount. Any takers on that offer would have profited handsomely. 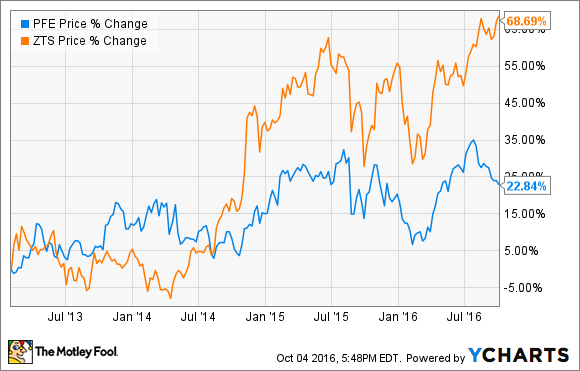 But this isn't the best comparison. I'd instead look at a similar choice faced by Abbott Labs (ABT 0.71%). Back in 2011, Abbott announced plans to separate into two companies -- one focused on branded prescription drugs and the other focused on products including medical devices and generic drugs. Abbott CEO Miles White promoted the split as a move that would stir investor interest and create more value for shareholders.

White was right on target. On Jan. 2, 2013, AbbVie (ABBV -0.47%) opened its doors as a new publicly traded company. The biotech's products included blockbuster drug Humira and a strong pipeline. Here's how shares of AbbVie and Abbott have performed since then: 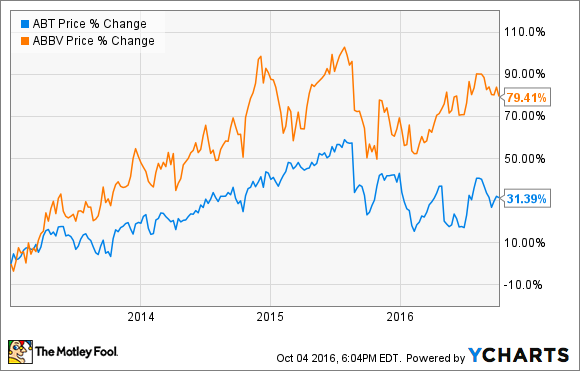 Could Pfizer have achieved these kind of results with a PfiVie spin-off? Maybe not. After all, Pfizer doesn't have a drug that matches the superstar status of Humira. However, the company's innovative health segment includes blockbuster drug Lyrica IH, which posted an impressive 19% year-over-year growth rate in the first half of 2016. Several other drugs are rising stars, with Ibrance and Xeljanz leading the way.

Pfizer says that it can drive value more effectively for shareholders by remaining intact. By operating two units within the same corporate umbrella, Pfizer is "already accessing many of the potential benefits of a split -- sharper focus, increased accountability, and a greater sense of urgency," says CEO Ian Read.

I don't doubt that Read is correct. However, I wonder if the company might have underappreciated the psychological boost a split could have had in the investor community. Pfizer has been something of a "blah" stock for a while now. I'm just not sure that's going to change significantly without a major splash like a split could have provided.