After several failed attempts, OPEC finally reached a consensus on a coordinated effort to intervene and stop the bleeding in the oil market. In doing so, it sent oil prices soaring at the end of September, which fueled a rally in the oil market. Troubled drillers, in particular, jumped on the accord because it could push prices higher in the future. Leading the way were Clayton Williams Energy (NYSE: CWEI), California Resources (OTC:CRC), Oasis Petroleum (NYSE:OAS), Penn West Petroleum (NYSE: PWE), and Denbury Resources (NYSE:DNR): 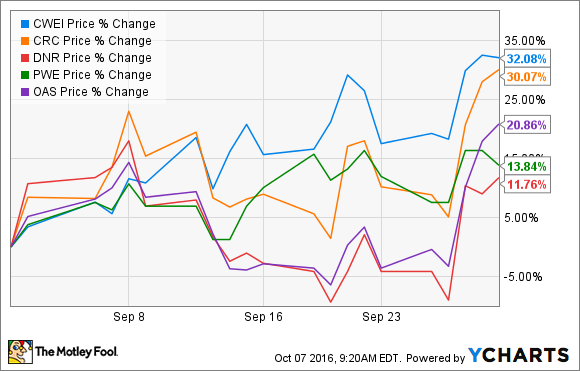 All five of these oil stocks have one thing in common -- they need oil market stabilization to put their operations back on solid ground. That is evident given the actions these producers have taken over the past year just to survive the downturn. Penn West Petroleum, for example, had to sell two of its core assets to pay down debt so that it did not default on its financial covenants. Meanwhile, Clayton Williams Energy needed to obtain a loan from a private equity fund as well as issue equity to bolster its balance sheet. California Resources and Denbury Resources, likewise, had to be creative, with both entering into debt exchanges to reduce their debt.

Because of their financial conditions, these companies struggled to keep their production flowing over the past two years. Oasis Petroleum has done the best in the group with it keeping its production basically flat for the past seven quarters. That is a lot better than Denbury Resources and California Resources, which saw their year-over-year production decline by 12% and 13%, respectively, in the second quarter.

That said, with their balance sheets improving and prices starting to stabilize, these producers are working to get back on solid ground and are beginning to reinvest capital back into their businesses to improve production. California Resources, for example, is increasing its spending in the second half to moderate its production decline and could invest even more if oil prices show a sustained improvement, which is more likely now that OPEC is intervening. Clayton Williams Energy, meanwhile, recently ramped up its development plans for the year, adding a rig to drill 10 wells after only drilling four during the first half of the year. Meanwhile, Penn West Petroleum boosted its capex budget by 80% to $90 million to develop more wells this year and plans to increase spending to $150 million next year due to the improvements in its balance sheet and the oil market, which should drive production up by 10%. Penn West could invest even more next year and boost its growth rate to 15% if oil prices rise to $60 a barrel.

These smaller oil producers have been through a lot over the past few years, and it was not always clear that they would make it through the downturn. However, after undertaking several strategic initiatives to improve their financial positions, all five appear to be on solid ground, especially now that OPEC is intervening in the oil market. If OPEC does indeed follow through on its initiates to stabilize the oil market, then it could enable these producers to deliver strong returns in an oil price recovery in the years ahead.