Shares of Gap Inc. (NYSE:GPS) jumped on Friday following better-than-expected September sales numbers. At 11 a.m. EDT, the stock was up about 14.5%.

In absolute terms, Gap's September sales report was mostly negative. Total comparable sales declined by 3%, down from a 1% drop during the same period last year. Comparable sales at Gap Global dropped 10%, with a fire at the Fishkill distribution center responsible for half of it. Banana Republic also posted poor results, with comparable sales falling 9%, with a third of that slump caused by the fire.

Old Navy was the silver lining, posting 4% comparable sales growth, which includes a negative impact from the fire of 2 percentage points. That's well above analyst expectations of just 1% growth. In addition to reporting strong results from Old Navy, the company disclosed that its merchandise margin in September came in higher than expected, more than offsetting the negative impact from the fire.

With shares of Gap down significantly from peak levels reached in late 2014, any good news was enough to send the stock soaring. 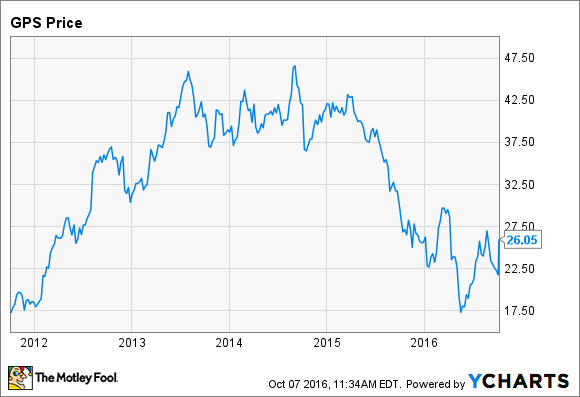 The negative impact from the Fishkill fire muddled Gap's September sales numbers, and the company expects it to have a negative impacts of 3 percentage points during October. Even backing out the effects of this one-time event, both Gap Global and Banana Republic posted steep sales declines. Old Navy was the company's savior, and higher merchandise margins suggest that Gap has been able to be less promotional. These are good signs, but it's clear that the company has a long way to go.