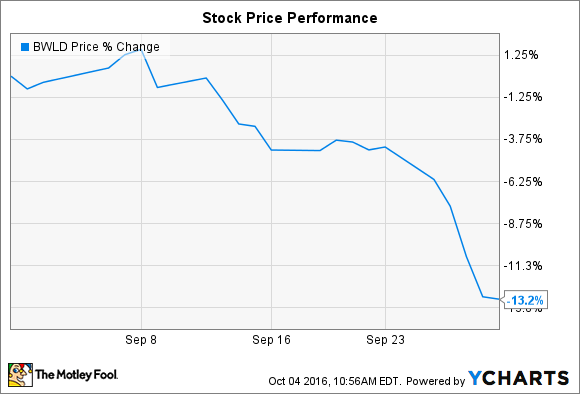 The decline contributed to an overall 11% loss so far this year, compared to a 6% gain for the broader market.

B-Dubs' September drop came as investors grew more pessimistic about the restaurant industry thanks to cautious commentary from its peers. Sonic (NASDAQ:SONC), the nation's biggest drive thru chain, lowered its sales and profit outlook in late September due to what it called "lower consumer spending in restaurants and continued aggressive competitive activity." That followed news that Cracker Barrel (NASDAQ:CBRL) was seeing "ongoing challenges in the industry" as it posted negative customer traffic for its fiscal fourth quarter.

Buffalo Wild Wings appears to be headed in the same general direction: Its comparable store sales growth was negative in each of the last two quarters.

CEO Sally Smith and her executive team have a number of initiatives in place that they hope will drive higher traffic in the third quarter. One of the biggest is an aggressive chicken wing promotion that aims to take advantage of falling chicken prices to produce strong sales growth. Other strategies include a new program that targets lunch traffic and a marketing blitz around the opening of the college and NFL football seasons.

The restaurant chain has a tough hill to climb, though, and weak industry trends could force it to report its first year of negative comps since 2010. That's no reason to sell a stock that has delivered better than 20% compound annual earnings growth over the last five years, but it does imply bumpier returns for shareholders over the short term -- including when it posts Q3 earnings in late October.