Shares of Fogo de Chao (NASDAQ: FOGO) were cooked in September, falling 14% according to data from S&P Global Market Intelligence. The stock slid steadily over the course of the month as concerns about a restaurant recession grew amid weak reports from other industry players. 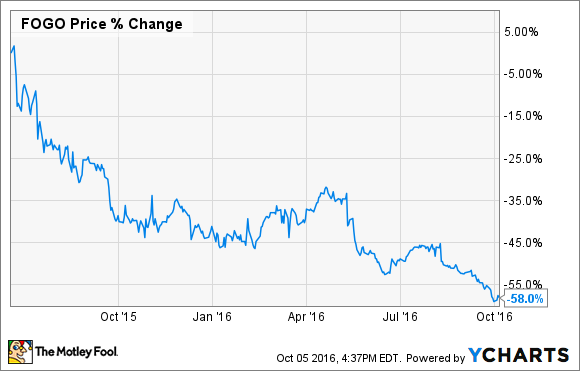 Like many recent restaurant IPOs, Fogo de Chao has struggled to gain its footing in its first year as a public company. The stock has now fallen more than 58% since its debut in June 2015. Though falling beef prices should be a boon for the Brazilian steakhouse chain, food deflation has caused consumers across the restaurant industry to shop at the supermarket and eat in more instead of dining out.

The company's August earnings report showed that it missed earnings estimates, while comparable sales dropped 1.6%, leading to an 8% decline in the stock. Its worst day in September came on the 28th when the stock fell nearly 4%, the same day that fast food chain Sonic reported weak preliminary earnings, indicating that challenges in the restaurant industry continued into the third quarter.

As a younger public company, Fogo de Chao is likely to be more volatile than its veteran restaurant peers with comparable sales falling across the board. Yum! Brands was the latest victim -- it sold off following its earnings report this week.

The good news for investors is that the stock now trades at price-to-earnings under 10 times and has a number of factors in its favor. Even with the restaurant recession, the company posted positive traffic growth last quarter at 0.6%. Steakhouses have been especially popular recently -- Texas Roadhouse has been one of the best-performing restaurant stocks -- and the company has a unique concept with an ample growth path ahead of it. Its profit margin near 10% also indicates that the business model is strong. With the stock already this cheap, a bottom may soon be near.