The financial media largely ignores small-cap stocks, but that doesn't mean you should, too. There are plenty of high-quality companies floating around with market caps well under $1 billion, and if you can buy them early in their growth cycle, then you could go on to earn market-thumping returns.

To that end, we asked three Motley Fool contributors to each pick a small-cap stock they think investors can buy right now. Read on to see why they selected Zoe's Kitchen (NYSE:ZOES), Tile Shop Holdings (NASDAQ:TTSH), and Fogo de Chao (NASDAQ: FOGO).

A restaurant concept with room to run

Brian Feroldi (Zoe's Kitchen): I love investing in restaurants early in their growth phase, because the investing thesis is so easy to understand. If the company has a winning concept on its hand, then sales and profits can grow quickly for years on end as management opens new stores. It doesn't get much easier than that.

This simple formula has worked like magic for long-term investors in Panera Bread, Buffalo Wild Wings, and Chipotle Mexican Grill, and early signs hint that Zoe's Kitchen is on a similar growth trajectory.

Zoe's is a fast-casual restaurant that serves healthy Mediterranean dishes. Think salads, sandwiches, and lean entrees that are simple, tasty, and made from scratch daily.

The company's food is highly differentiated from most other chain restaurants, which customers clearly appreciate. Comparable-store sales have increased for 26 quarters in a row, a remarkable achievement. More recently we saw comps jump by 4%, an impressive number given today's tough restaurant environment.

Currently, Zoe's operates 191 stores that are primarily found in the Southeast, but the company believes it could ultimately open 1,600 stores. in the U.S. alone. This year, the company expects to open roughly 35 new stores, which is a pace it should be able to keep up for years on end. That sets the company up nicely to grow revenue and profit at above-average rates for decades to come, which makes this a great stock to consider buying today . 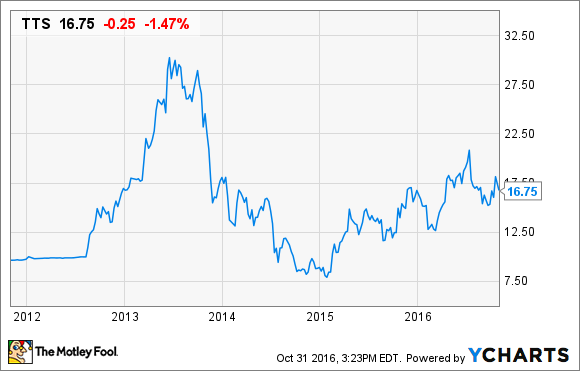 So why does Tile Shop make my list as a small-cap stock to buy this month? Three things:

Since Homeister's promotion to CEO at the beginning of 2015, the company has steadily improved its cost structure, paid down debt, and built up its cash position. At the same time, the company has invested in its stores, adding more store support and management personnel. The result? Seven consecutive quarters of improved store-management tenure, higher comparable-store sales, and what management describes as a strong bench of future managers to support the company's efforts to expand. And with fewer than 150 total stores, there's a pretty big opportunity for growth, in a very fragmented retail tile industry.

Lastly, the long-term trends are in Tile Shop's favor when it comes to housing. Millennials are only just starting to enter the homeownership market, and as they make up the most populous generation in the U.S., the company's efforts to consolidate the retail tile market should pay off for years to come.

I'll have the steak

Tim Green (Fogo de Chao): One interesting small-cap stock that recently caught my eye is Brazilian steakhouse chain Fogo de Chao. The company is small, operating just 42 restaurants, but profitability is through the roof. During the second quarter, the company reported a restaurant contribution margin of 29.5% and an operating margin of nearly 14%.

Given Fogo de Chao's unique concept, the ceiling on the company's restaurant count is probably not all that high. In a presentation from earlier this year, Fogo de Chao pointed to the potential of opening 100 new restaurants in the United States, along with opportunities in various international markets. The company's aim is for each restaurant to generate $7 million of sales by the third year in operation, along with a contribution margin in the high 20s.

Fogo de Chao has produced net income of $33 million over the past 12 months, putting the P/E ratio below 10. There's a reason for this low valuation -- comparable sales have been weak. The company expects comparable sales to decline by as much as 2.5% this year, driven by general softness in the restaurant industry, as well as currency negatively affecting its 10 restaurants in Brazil.

Many restaurant chains are struggling to attract diners, and Fogo de Chao is no exception. But its unique concept, impressive profitability, low valuation, and growth potential make it an interesting investment opportunity.