Chicken or beef -- which meaty restaurant can strengthen your portfolio in 2016?

It's been a brutal year for two hot restaurants which went public last June -- chicken wing chain Wingstop (WING 1.58%) and Brazilian steakhouse Fogo de Chao (NASDAQ: FOGO). Wingstop, which went public at $19 per share, surged to the mid-$30s in August before plunging back to the low $20s. Fogo debuted at $20 per share, soared over $27 on its first trading day, then tumbled back to around $14.

When I compared Wingstop and Fogo de Chao last July, I declared that Fogo was the better buy because it had stronger sales growth, better earnings growth, and a cheaper valuation. Apparently the market didn't agree, since Fogo now trades at a 30% discount to its IPO price while Wingstop still hovers above its initial price. Let's take a closer look at how both restaurants fared over the past six months, and see if either one is a compelling contrarian buy.

The key facts
Wingstop and Fogo de Chao operate on different business models. Nearly all of Wingstop's stores are franchised, and the company only takes a 5% to 6% cut of each location's gross sales. All of Fogo's restaurants are company owned, and the company doesn't plan to introduce a franchising model anytime soon. The average size of a Wingstop store is just 1,700 square feet, while the average Fogo de Chao restaurant is about 10,000 square feet.

In fiscal 2015, Wingstop's store count rose 18.7% annually to 845 units, most of which are located in the United States. Wingstop only generates royalties and franchise fees from those stores, which equal 5% to 6% of each location's gross sales. Fogo recently opened its 30th location in the U.S., bringing its total global store count to 41 -- up from just 25 at the time of its IPO. 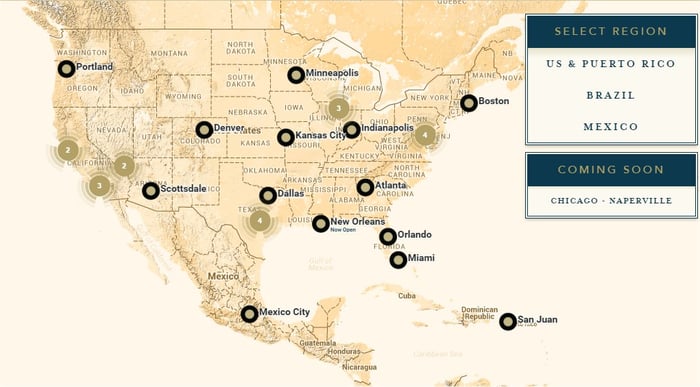 Fogo's growth has been less impressive. During its second quarter, revenue slipped 0.5% annually and narrowly beat expectations. But during the third quarter, revenue fell 4.3% and missed estimates. Fogo's exposure to the Brazilian market (16% of sales) hurt its top line growth, due to foreign exchange impacts and unfavorable comparisons to an influx of World Cup visitors last year. On a constant currency basis, Fogo's total revenue actually rose 7.4%.

Bottom line and valuation comparisons
Since Wingstop generates most of its revenue from franchises, it has fewer overhead risks and higher margins than Fogo. During the third quarter, Wingstop reported an adjusted EBITDA margin of 34%, compared to Fogo's 22%. However, that represents declines from 37.5% for Wingstop and 23% for Fogo during their second quarters. Both companies attributed that margin contraction to new store openings. On the bright side, food costs are expected to remain stable in the near term thanks to lower fuel costs.

Looking ahead, analysts expect Wingstop's earnings to grow 20% annually over the next five years, which is considerably higher than the industry average of 15%. Unfortunately, that growth isn't justified in its forward P/E of 42 and 5-year PEG ratio of 2.5. Since a PEG ratio under 1 is considered undervalued, Wingstop's stock is quite expensive compared to its long-term growth prospects.

Analysts expect Fogo to grow its annual earnings at just 9% over the next five years. Its forward P/E of 14 looks cheaper than Wingstop's, but its PEG ratio of 1.7 also indicates that the stock still can't be considered cheap.

The verdict: avoid both
Wingstop looks like a better bet than Fogo de Chao in terms of top and bottom line growth, but its stock is too expensive compared to its earnings growth potential. Wingstop might be worth another look if it falls further, but it's definitely not a dependable stock to own in today's volatile markets.