Year to date, ExOne's (NASDAQ:XONE) stock has absolutely crushed Stratasys' (NASDAQ:SSYS). ExOne started outpacing Stratasys in August, when its second-quarter earnings showed that the industrial 3D printing specialist is moving in the right direction, and management appointed Jim McCarley as CEO to replace Kent Rockwell, who will be staying on as chairman of the board. 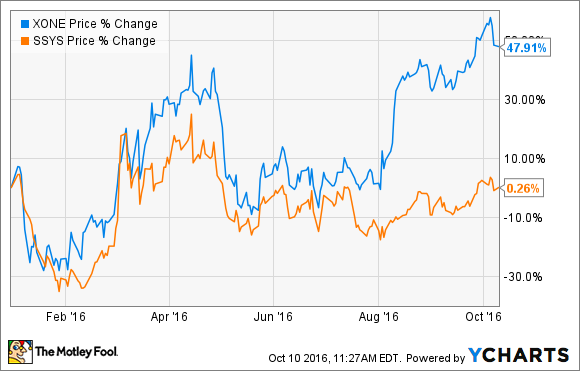 While these developments have helped boost ExOne's stock price in the short term, it doesn't necessarily make it a better buy than Stratasys in the long run. After all, ExOne is a highly specialized 3D printing company compared to Stratasys, which could limit its longer-term growth potential.

In terms of market capitalization, Stratasys is roughly five times larger than ExOne. This year, Wall Street expects Stratasys to generate about $702 million in revenue and ExOne to generate about $52 million. Aside from scale, the major difference between the two companies is that Stratasys offers a more expansive 3D printing solution to the marketplace than ExOne's offerings.

Stratasys' 3D printers cover the gamut, from sub-$2,000 consumer-oriented printers to professional and industrial printers that can cost well over six figures. Conversely, ExOne's printers are tailored for larger-scale industrial users with deep pockets, which typically range from a few hundred thousand to over $1 million.

In the second quarter, Stratasys sold 5,394 printers, which translates to an average selling price of at least $23,000, but likely lower, considering the company reports hardware and material sales together. During the same period, ExOne sold nine printers, for an average selling price of about $533,000. Clearly, Stratasys' 3D printers cater to a far wider range of use cases and budgets than ExOne's industrial offerings.

Although it's often an encouraging sign that a company seeks to specialize and own a specific niche within a larger industry, ExOne's printers appear to be too specialized. Last October, ExOne noted that it had more than 200 of its specialty 3D printers in operation. At the close of the second quarter, Stratasys collectively sold over 156,000 printers -- the most of any 3D printing company -- since the respective inception dates of its Stratasys, Objet, and MakerBot brands.

There are two major drawbacks from ExOne's low-volume model.

First, its sales can fluctuate widely from quarter to quarter, which can significantly impact its financial performance. This is due to the fact that ExOne incurs fixed costs to operate and maintain its manufacturing facilities, regardless of how many printers it sells. During the first quarter of last year, ExOne failed to recognize enough printers as revenue to cover its manufacturing costs, which resulted in a 0% gross margin. Moreover, as the following chart illustrates, the lumpiness of ExOne's unit sales makes its gross margins extremely volatile on a quarterly -- and even yearly -- basis: 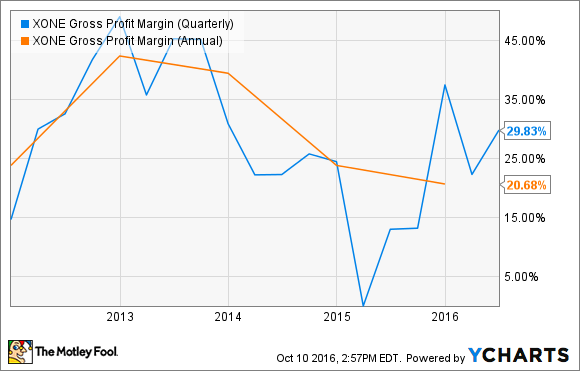 Second, ExOne's ability to generate recurring material sales from each 3D printer it has in operation pales in comparison to what Stratasys could potentially generate from its industry-leading installed base. Essentially, with a base of over 200 printers in operation, ExOne is currently more focused on increasing the acceptance of its binder jetting technology in the marketplace than it is developing a meaningful razor-and-blades model. From this perspective, it's clear that ExOne is an earlier-stage growth company than Stratasys.

Despite being 3D printing companies, Stratasys and ExOne don't have very much in common. They cater to different use cases with different material sets (plastics for Stratasys and metals for ExOne), and are in different stages of life. Ultimately, Stratasys offers investors broader exposure than ExOne to the 3D printing industry, which is expected to grow significantly in the coming years and largely happen outside ExOne's focus.

While these factors may make Stratasys a "better buy" than ExOne, it doesn't necessarily mean that Stratasys is a winning investment. After all, Stratasys faces several notable challenges, including falling printer sales, increased competition, and execution issues, all of which are currently preventing it from achieving greatness.