Investors, beware: The U.S. Senate could be gearing up to scuttle the proposed merger between Dow (NYSE:DOW) and DuPont (NYSE:DD).

Investors, rejoice: No, they won't!

Which of those headlines is the right one? Honestly, it's still hard to say. In the U.S. Senate there is a movement afoot to nix Dow's proposed merger-of-equals with DuPont, while over in Europe, antimonopoly regulators are also looking into the deal.

But yesterday, TheFly.com reported that European banker UBS is offering this reality check to investors: While there's never an absolute certainty that any proposed merger will go through, UBS believes that this particular merger between Dow and DuPont will pass muster. Furthermore, whether the deal happens or does not, UBS is convinced that Dow stock, at least, is "now too cheap to ignore."

Here are three things you need to know about the deal. 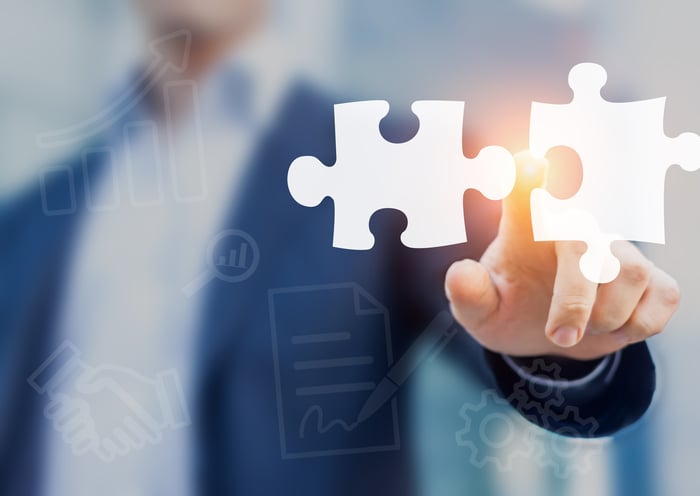 1. A deal a long time in the making

Dow's proposed deal with DuPont began nearly a year ago, and won't be fully completed for another couple of years at the earliest. The two companies announced their intention to merge in December of last year, laying out a complicated process for uniting the two businesses into one -- to be known as DowDuPont -- before embarking upon a two-year process to split the just-united company into three smaller businesses (let's call them "Dow," "Du," and "Pont" for now).

So far, not only the boards, but the shareholders of both companies, too, have voted to approve the merger. UBS likes it, too, and in its upgrade yesterday, said it thinks merging Dow with DuPont increases Dow's value from $53 per share to $62 per share -- and justifies a buy rating on the stock. All that remains now, is for regulators such as the Department of Justice, Federal Trade Commission, and the European Commission, to weigh in. Assuming they approve the deal, here's how it will work, and what it means for investors.

When announced in December, Dow and DuPont described their merger as designed to create a gigantic company with "combined market capitalization" of "approximately $130 billion," and with the potential to be worth $160 billion in time. They're not quite there yet (in fact, both companies' market caps fell immediately after the announcement), but they've since turned around, and are again moving in the right direction.

Regardless, it's the Dow half of this transaction that UBS is recommending buying today, and not DuPont. Why?

UBS calls Dow stock "too cheap to ignore" already. And if you take the companies' managements at their word, Dow stock could be even cheaper than it looks.

As the companies explained in their merger announcement late last year, merging Dow with DuPont, then splitting the combined company in three, will ultimately result in $3 billion worth of "run-rate cost synergies," which will result in investors valuing the three companies that eventually result from the process having $30 billion more "market value" than Dow and DuPont had going into the process.

Now, over the past 12 months, S&P Global Market Intelligence figures show Dow and DuPont reporting combined net profits of about $10.7 billion. If you add to that the $3 billion in extra profits they could retain by cutting $3 billion in "cost synergies" (let alone the $1 billion in what the companies call "growth synergies"), the logical result is that once merged, then resplit, Dow, Du, and Pont should be producing $13.7 billion or more in combined annual profit.

So how much is that worth to investors?

The most important point: Should you buy Dow stock?

Again, let's take all of Dow's and DuPont's promises at face value: $130 billion in market capitalization, divided by $13.7 billion in potential annual profit, implies that investors will be paying about 9.5 times earnings for a claim on each dollar in annual profit produced once the companies have merged, split, and begun reaping the rewards from their actions -- that's assuming no additional gain as investors warm to the deal, and bid up the price by management's promised further "$30 billion."

Long story short? UBS is right. The disconnect in valuations here really is too cheap to ignore.