With the price of gold up more than 25% year to date, many investors are considering gold-mining stocks, such as Newmont Mining Corp. (NYSE:NEM), a global leader in the gold-mining industry. Let's give the company a thorough look to see how management has fared in navigating the company through a challenging, volatile market. We'll grade the company on three axes: income, cash flow, and debt.

Revenue on the rebound

To state the obvious, the first positive sign of Newmont's financial health would be steady top-line growth. 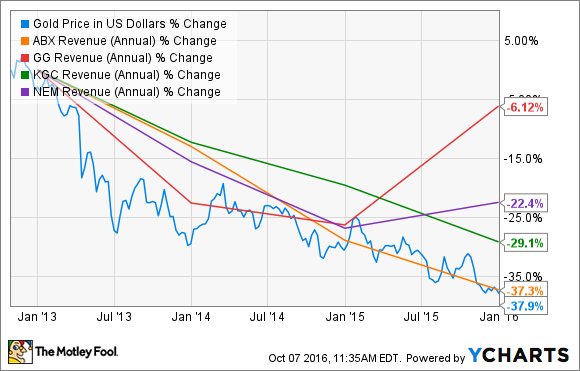 Newmont, like many gold stocks, has reported declining revenue over the past five years as the price of gold has also fallen; however, the company has negotiated the industry's challenges better than some of its peers. For example, in 2015 Newmont Mining -- as well as Goldcorp (NYSE:GG) -- reported revenue growth, while peers Kinross Gold (NYSE:KGC) and Barrick Gold (NYSE:GOLD) continued to report falling revenue.

Although it would be reductive to attribute Newmont's revenue growth to a single factor, one must recognize the significant impact that the company's Indonesian mine had on the top line. In 2015, Newmont reported a year-over-year gold production increase of 789% at the Batu Hijau mine, resulting from access to new ore at the site, yielding $669 million in sales for 2015 -- considerable growth over the $80 million it reported in 2014.

Examining a company's income, however, transcends a cursory glance at the top line; it's also important to gauge how well the company is controlling costs. Here we find that Newmont is doing a modest job. One of the most important metrics in the mining industry is the all-in sustaining costs (AISC) -- the mining industry's version of operating expenses. All figures shown are on a per-ounce basis:

Barrick Gold -- arguably Newmont's closest competitor -- is widely recognized in the industry for its superior ability to manage its AISC. Relative to Barrick Gold, Newmont's AISC don't sound any alarms per se; however, it is worth noting how disparate the figures become in the years to come based on management's estimates.

So far, the company's health seems fair. Let's see how its balance sheet figures in.

In a capital-intensive industry like mining, investors must closely monitor a company's debt load -- especially because volatility in the price of gold can compromise earnings and, consequently, the funds available to service its debt. 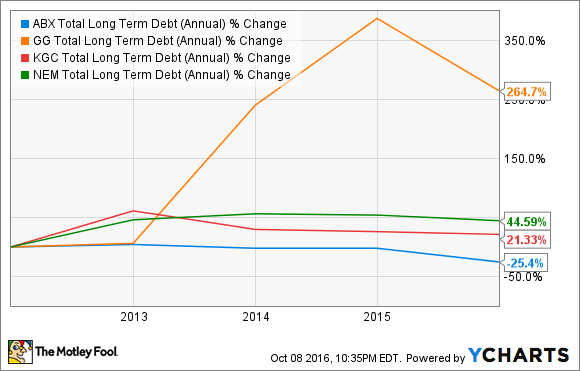 Dismissing Goldcorp as an outlier, we find that Newmont's long-term debt has grown at more than twice the rate of Kinross Gold and in the opposite direction of Barrick Gold -- its closest competitor. But before we overreact and reach for a red flag, let's peek at a leverage ratio to provide greater insight. 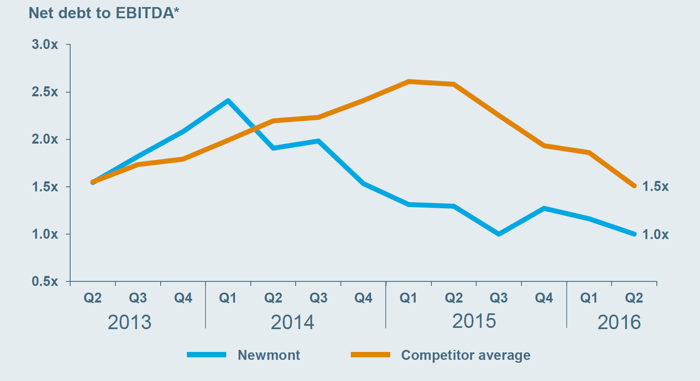 One effective metric we can use to assess the company's debt is the net debt-to-EBITDA ratio. By calculating this, we arrive at an estimate of how long it would take the company to repay its debt if net debt and EBITDA remained constant. According to a corporate presentation slide from September, Newmont has adopted a more conservative approach to taking on debt over the past few years. So although the company's debt has risen at a greater rate than peers such as Barrick Gold and Kinross Gold, its management seems well equipped to handle it.

Having nearly finished this checkup, we've found reasons to be both concerned and hopeful. Now let's turn to the company's cash flow.

Here we find some promising signs. Since 2011, when it reported an all-time high of $3.58 billion, Newmont's operational cash flow had been in steady decline until last year. Improving by 49% year over year, Newmont reported $2.15 billion in operational cash flow for 2015, according to Morningstar. And thanks to management's ability to limit capital expenditure spending to $1.4 billion -- only $300 million more than the previous year -- there's an even more auspicious sign regarding the company's cash flow. 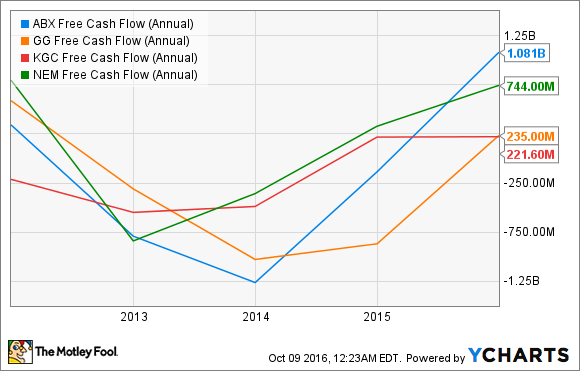 Newmont represents the only company in this peer group to steadily grow its free cash flow since 2012. Barrick Gold's exceptional performance since 2013 may outshine it, but the $744 million which Newmont reported in 2015 -- a 127% improvement year over year -- is certainly indicative of a company in sound financial shape. And in forecasting capex spending to fall between $700 million and $800 million for 2018 through 2020, the company's free cash flow may continue to rise for several years to come.

Although it's too early to declare with certainty whether Newmont has successfully recovered from its falling revenue woes, the uptick it reported last year is a hopeful sign -- one that many of its peers failed to share. Nonetheless, the company's manageable debt level and satisfactory cash flow certainly warrant a passing bill of financial health.

In the months ahead, investors should closely monitor how the divestiture of its Batu Hijau mine -- expected in the third quarter -- affects the company's upcoming earnings reports. In addition, investors should keep an eye on whether the company is growing its EBITDA, and thus able to service its growing debt. Lastly, they should look for continued free cash flow growth in light of management's guidance of decreasing capex spending.