Shares of salesforce.com (NYSE:CRM) fell 10.2% in September 2016, according to data from S&P Global Market Intelligence. The decline came in two quick dips.

After the closing bell on Aug. 31, Salesforce reported results for the second quarter of fiscal year 2017. The quarterly update itself was fine, as Salesforce exceeded analyst expectations on both the top and bottom lines. However, currency exchange headwinds paired up with weak sales at the end of the reported quarter, resulting in soft guidance for the year ahead.

So, the stock closed 5% lower on Sept. 1: not a great start to the new month.

Later on, the rumor mill spit out reports that Salesforce was putting together a buyout bid for troubled social-network operator Twitter (NYSE:TWTR). Investors scratched their heads over the need for this deal, and Salesforce shares dove another 6% overnight. 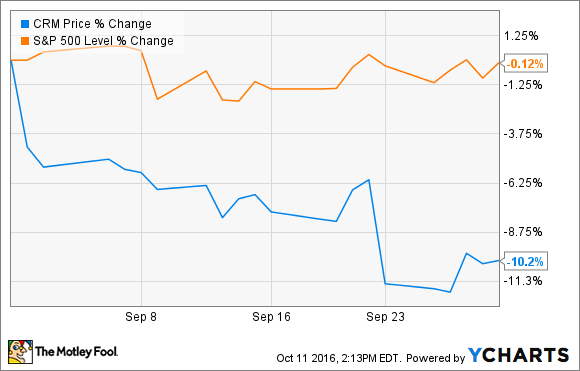 The Twitter buyout talks are reportedly still going on. Share prices lifted a bit on Oct. 10 amid reports that the two companies would go their separate ways, but dropped right back down again as multiple sources reported further buyout negotiations.

I agree with the critics here. Adding a sputtering Twitter to Salesforce's finely tuned business machine wouldn't make much sense, and would be a spectacular waste of at least $12 billion. Take one look at Salesforce's sales and cash flow growth over the last five years, and tell me if you think that this company needs to depend on senseless acquisitions to keep the engines running: 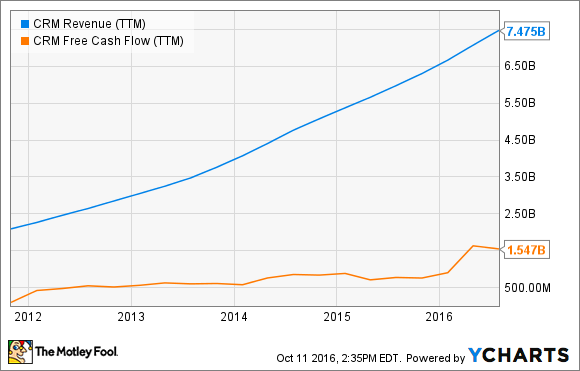