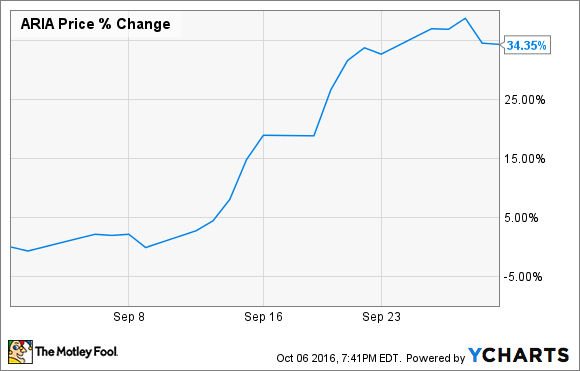 The drugmaker's stock tracked higher in September largely because of rumors that the company was attracting interest from potential buyers. Ariad's product portfolio currently consists of a single drug, Iclusig, which is approved as a later-line therapy for two rare forms of leukemia. Iclusig is forecast to generate between $170 million to $180 million in revenue this year, according to Ariad's internal forecast.

While M&A fever has definitely hit the biopharma space, and cancer companies are proving to be prime targets, Ariad's present valuation might be too rich to warrant a compelling tender offer. In short, Ariad's shares are already trading at 11 times the company's projected 2017 revenue, making it one of the more expensive mid-cap biopharmas.

Keeping with this theme, Ariad's lofty valuation already scuttled a prior deal with Baxalta last August. Specifically, Baxalta was reportedly willing to pay $2 billion for Ariad, but shareholders balked at the idea of paying such a high premium for a company worth under $1.5 billion in market cap.

Ariad's market cap currently exceeds Baxalta's former offer by a noteworthy 33%, meaning that it might take an especially desperate suitor to get a deal done anytime soon. Having said that, Ariad's valuation might become more enticing if the drugmaker gets the green light from the FDA for its second-line ALK+ non-small-cell lung cancer (NSCLC) drug candidate, brigatinib.

Long story short, brigatinib has the potential to produce blockbuster level sales if it can gain approvals as both a second-line and front-line therapy for ALK+ NSCLC. The FDA is expected to make a determination on brigatinib's second-line regulatory filing in the first half of 2017, and the drug's late-stage trial for a front line indication is on track to produce top line data in 2019.

Until Ariad has a second approved product on the market, however, the company's valuation simply looks too rich to make a buyout a strong possibility. Ariad, after all, has been attracting unwanted attention over its series of dramatic price hikes for Iclusig this year, which could result in pushback from payers moving forward.