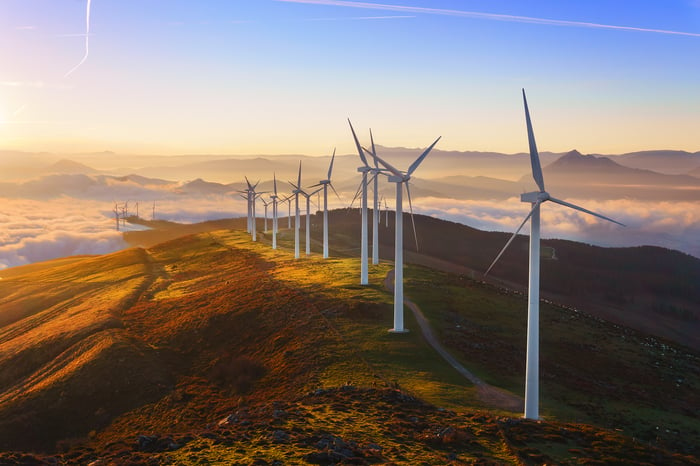 Wind energy has been a booming business over the past decade, and it's still a forgotten portion of the world's energy mix. One company that hasn't forgotten its importance is General Electric (NYSE:GE), the industrial giant that's a powerhouse in energy. GE just announced that it's buying LM Wind Power for $1.65 billion to further vertically integrate its wind business.

GE has long been a turbine manufacturer and builder of wind farms, but LM Wind Power will add the supply of rotor blades to the company. And with one-fifth of the rotor market, this is a big deal, even for GE.

Why wind has been an up and down business

For industrial giants, wind is still a big business. GE, Vestas Wind Systems (OTC:VWSY.F), and Siemens (OTC:SIEGY) are supplying billions of dollars in wind turbines each year, and that figure is growing rapidly. According to the Global Wind Energy Council, between 2000 and 2015, wind installations exploded from 3,760 MW to 63,013 MW per year.

But the road to growth hasn't been steady. Just look at the U.S. Energy Information Administration's chart showing annual wind capacity over the past decade: 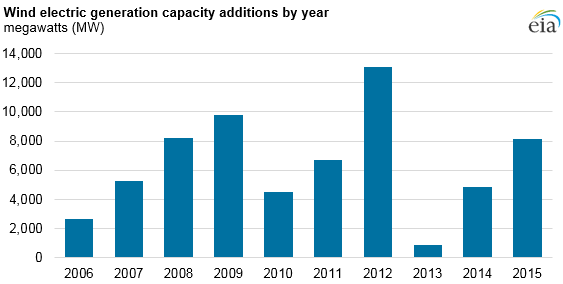 Global wind installations haven't been quite as up and down, but growth rates can change rapidly and in 2013 demand dropped like a rock.

This boom and bust business has been difficult for manufacturers to adapt to. How do you plan for a business that can see demand drop by more than 90% in one year?

What's changed in 2016 is that manufacturers think the boom and bust days of wind are over. Subsidies that once drove wind investment decisions are falling away and wind is standing on its own. That should lead to a more stable demand environment.

Why wind? Why now?

One reason GE in particular is so bullish on wind is the new energy paradigm around the world. Wind is no longer dependent on subsidies like it was a decade ago, driving the boom and bust cycle above. It's cost competitive with fossil fuels, and countries in Latin America and Asia want all the clean energy they can get.

Recent energy auctions in Mexico and Argentina show how competitive wind energy has become in these growth markets. Mexico's latest auction was for 2.9 GW of new energy generation, 43% of which was won by wind. Argentina awarded 708 MW of 1,109 MW to wind projects in its auction.

Investment bank Lazard's Levelized Cost of Energy Analysis-Version 9.0 in late 2015 also said that wind's energy costs are lower than all other energy sources on a per kWh basis, including versus other alternative energy and fossil fuels.

The low cost of energy from wind creates a fertile ground for growth and makes for a much more stable market than wind has ever had before. GE will now be able to bring design and manufacturing of turbine blades in house, expanding the margin on each installation. And while it could still be a supplier to competitors, I think the strategy will be to focus on using LM Wind Power to grow profits and expand market share in the future.

GE is eyeing a bigger wind business, and by buying LM Wind Power to further vertically integrate its operations, it may be able to both grow and expand margins. With wind energy now less reliant on subsidies than ever before, the future should be bright for GE's wind energy business.