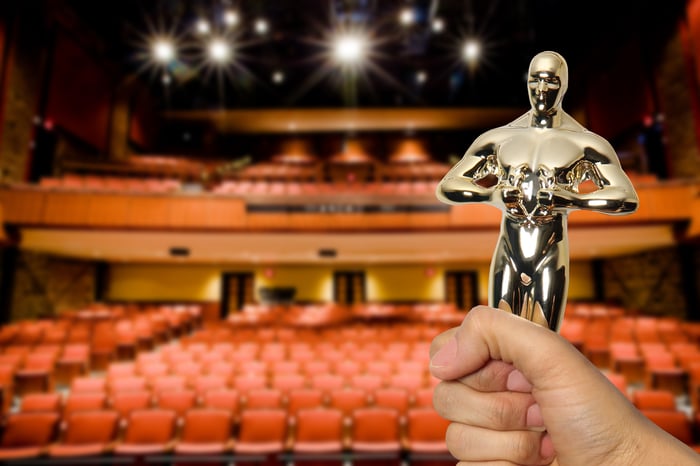 Netflix (NASDAQ:NFLX) has already won a couple of dozen Emmy awards for its original series and stand-up comedy specials. But its original films haven't gained quite as much recognition.

On several occasions, Netflix's streaming-video rival, Amazon.com (NASDAQ:AMZN), has brought up its intentions to win an Oscar. But unlike Netflix, Amazon is willing to give theaters an exclusive window to screen the movie before it streams; that allows films produced by Amazon Studios to become Oscar-eligible. (In order for films to be eligible for an Oscar, they must run for at least a week in theaters in both L.A. and New York). Netflix, by comparison, has had a difficult time convincing theaters to screen its films at the same time it starts streaming them on its service.

Earlier this month, Netflix signed a deal with high-end movie theater operator iPic Theaters to show 10 Netflix films in its theaters. The deal with iPic will satisfy those requirements, but it could also open the doors for Netflix to distribute its films with major theater operators Regal Entertainment (NYSE: RGC) and AMC Entertainment (NYSE:AMC).

The National Association of Theater Owners has some concerns about Netflix and iPic's plans. Chief executive John Fithian said in a statement: "Simultaneous release, in practice, has reduced both theatrical and home revenues when it has been tried."

While that may be true, it could be something of a self-fulfilling prophecy, as theaters play a large part in the promotion of films. If the theater chooses not to run as many trailers for a film that will have a simultaneous home-video release, not as many people are likely to see it in theaters or at home.

Theaters have an interest in keeping things in the status quo, though. An exclusive window can be a big differentiating factor for entertainment services like movie theaters (see also: music streaming). With the ubiquity of Netflix, it would be much more difficult to draw audiences to the theater when they could just watch at home at no marginal expense.

Earlier this year AMC showed Netflix's Crouching Tiger, Hidden Dragon sequel on select screens -- mostly in China. Netflix doesn't operate in China, so the only option to see the film early was in theaters.

But AMC's CEO Adam Aron told analysts, during the company's fourth-quarter earnings call earlier this year, that "AMC will cross future bridges of competition if and when they arise." In other words, he's much more open to the idea than his predecessor Gerry Lopez, who was adamantly against the idea of day-and-date releases with Netflix.

Regal Entertainment's CEO Amy Miles told analysts last year: "We'd be open to any idea, any discussion, any test, any experiment that we think has the potential to grow the overall pie. But that's as long as any associated economic arrangement provides us a financial participation that is greater than or at least equal to the risks that we're undertaking. ... It's never been the case with any type of Netflix discussion." In other words, she doesn't want to market a bunch of Netflix films just to see audiences watch the movies on Netflix, instead of in Regal's theaters, without getting compensated for it.

If the experiment with iPic proves the viability of theaters showing Netflix's films with a simultaneous release, AMC and Regal might not be so opposed to the idea. After all, both are committed to bringing in more and better content for their patrons by maintaining strong relationships with big production studios, smaller independent studios, and sports and event programmers.

The upside for Netflix

For Netflix the benefits are twofold. Theater revenue presents an opportunity for incremental sales on top of its subscription fees, and Netflix can bring in more subscribers to its streaming service. That's particularly important internationally, where it's only just expanded to a lot of markets and original content plays an even bigger role than in the US.

The iPic agreement will make its films Oscar-eligible, which could put a bigger spotlight on Netflix's original films and draw more people to subscribe to the service. But the bigger potential is to prove the viability of such agreements with the larger theater chains.