Shares of Renren Inc. (NYSE:RENN) were running higher last month, climbing 13% according to data from S&P Global Market Intelligence. The stock jumped toward the end of the month on a plan to spin off some parts of its business: 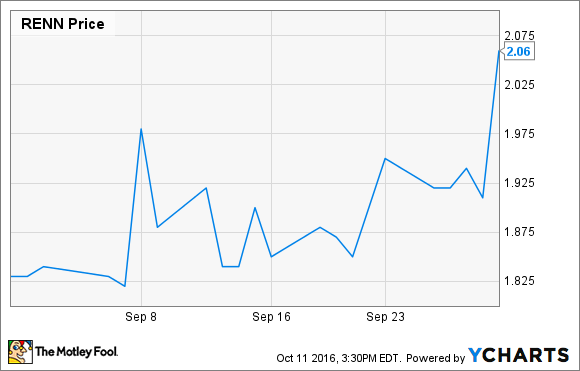 The Chinese social-media company once known as the "Facebook of China" said that it would "spin off a newly formed subsidiary ... that will hold the company's social video platform woxiu.com and most of the company's investments in minority stakes in privately held companies."

The stock surged 8% on Sept. 30 as Renren announced the move, which is essentially a defensive play -- the company said it wanted to minimize the risk it could be deemed an "investment company" and therefore be subject to different rules.

The market tends to cheer spinoffs, especially when they're from a troubled stock like Renren: Its shares have fallen nearly 90% since its 2011 IPO.

The stock soared again on Oct. 4, gaining 20% as the company confirmed the spinoff, but it gave back those gains in subsequent sessions. I'd expect continued volatility as the stock remains challenged, with or without the spinoff.