When building a portfolio, many investors look to the future, attempting to get in early on a new technology. Fuel-cell technology certainly fits the "energy of the future" billing and has a bright future ahead. According to Navigant Research, annual installed stationary fuel-cell capacity is expected to grow worldwide from 262.6 MW in 2016 to 3,069.5 MW in 2025. Few hydrogen-heavy stocks offer investors this opportunity -- currently, only Plug Power (NASDAQ:PLUG) and FuelCell Energy (NASDAQ:FCEL). 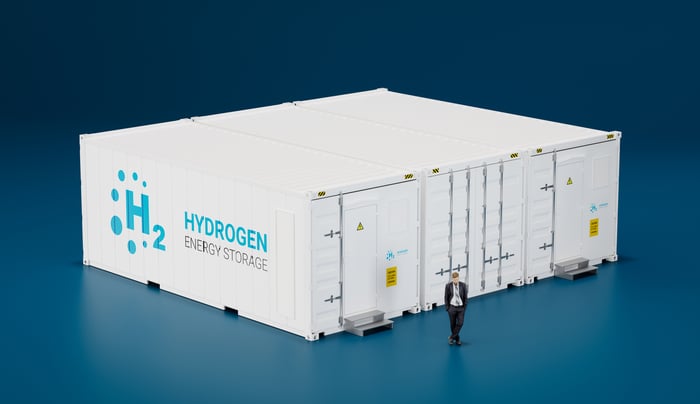 According to a report in the Wall Street Journal, investors will soon have one more choice: Bloom Energy. The company recently filed for an IPO with the Securities and Exchange Commission. When its S-1 becomes available to the public, there will be plenty to sift through, so let's get a head start by taking a look at the information that's already out there.

Founded in 2001, Bloom Energy provides its Energy Servers to customers in a variety of industries. Each Energy Server -- comprised of thousands of the company's solid oxide fuel cells -- produces about 200 kW of power, which is enough to meet the baseload needs of 160 average homes. Bloom Energy's solution is modular, so the company can easily provide a solution consistent with its customers' power needs.

Because the company is privately held, there is not much public information about the company's financials. One thing we know for sure is that the company reported less than $1 billion in revenue last year, since that is what enabled it to register confidentially for its IPO.

There is one specific figure that is public knowledge, though. According to the 2015 Fuel Cell Technologies Market Report issued by the U.S. Department of Energy, Credit Suisse invested $130 million in Bloom Energy in 2015 -- a noteworthy amount, considering the disclosed venture capital and public equities investments in fuel-cell companies for last year amounted to $132.3 million.

Another figure to note is 5.15 MW -- the publicly disclosed orders and installations reported by Bloom Energy in 2015.

Of course, this comes with the proviso that there may be a considerable number of orders and installations which the company did not release to the public. We'll have to wait for the S-1 to see what, if anything, Bloom Energy was keeping private.

With 15 years of commercial production behind it, Bloom Energy has forged relationships with businesses across a variety of industries.

For one, Bloom Energy counts large retailers like IKEA as one of its many customers. The relationship seems to be a healthy one. In August, the company announced that it will be providing its Energy Server solution to IKEA's store in New Haven, Connecticut. Bloom Energy now provides IKEA with more than 1.4 MW of power at five retail locations.

In addition to retail customers like IKEA, Bloom Energy provides fuel-cell solutions to (among others) the manufacturing, food and beverage, technology, and logistics industries. Arguably, one of its most lucrative opportunities -- which it is already seizing -- is the data-center market.

In May 2015, Bloom Energy announced that it would be providing Equinix, a global leader in data centers, with a 1 MW project at the latter's Silicon Valley location. And this past summer, Fortune reported that Bloom Energy will be supplying a 4 MW solution for Apple's (NASDAQ:AAPL) Campus 2. This builds on the relationship which the two companies forged in 2012, when Bloom Energy provided a 10 MW solution at Apple's data center in North Carolina.

Of the two largest fuel-cell companies traded publicly, Plug Power and FuelCell Energy, only the latter represents significant competition. Plug Power, which reported $103 million in revenue for 2015, primarily provides solutions to the material-handling equipment industry, though it is attempting to expand into the ground-support equipment market.

Bloom Energy's strongest competition is FuelCell Energy: These are the two dominant companies in the stationary power market.

Like most people, I'll be focusing on Bloom Energy's revenue growth when it reveals its financials, but for greater context I'll be measuring that against FuelCell Energy's growth (or lack thereof).

Investors who maintain interest in fuel-cell technology but who are deterred by the volatility in Plug Power and FuelCell Energy will certainly want to follow Bloom Energy's IPO closely, as it may present a more compelling investment opportunity. But investors in Plug Power and FuelCell Energy should also be tuning in, as Bloom Energy's financials, when released, will certainly provide greater insight into the overall state of the industry.

There is considerable risk in buying shares in a company following its IPO, and Bloom Energy will be no different. The fuel-cell energy market is not for the faint of heart, and I'd suggest interested investors wait this one out before considering a position.