Home Depot (NYSE:HD) has a simple growth strategy: Dominate the home improvement market while expanding into new product categories and customer segments. Specifically, over the next few years the retailer aims to develop a foothold in the maintenance, repair, and operations niche and lock up the loyalty of the professional customer side of the business.

While there are dozens of financial metrics investors could use to judge the retailer's success with these goals, most of the information we need is conveyed in just two figures: Comparable-store sales growth and net earnings.

Comps, which describes sales at existing locations, is a key metric for any retailer. But it's even more important for Home Depot because the company isn't expanding its store base, and so its growth has to come mostly from boosting the productivity of its current shops.

Home Depot's comps have trounced most national retailers' over the last few years as the housing industry posted a sharp rebound. They were up by 6% last year, 5% in 2014, and 7% in 2013. Those numbers simply confirm that the company has the wind at its back. In fact, spending on home improvement has surged from a post-recession low of $400 billion per year in 2010 to over $700 billion now.

It isn't particularly impressive that Home Depot can book higher sales while its industry has almost doubled in size. What is impressive, though, is the fact that it is consistently outpacing rivals. Lowe's (NYSE:LOW) has trailed Home Depot on the comps metric by a wide margin in each of the last five years. As a result, Home Depot's overall sales growth is greater than its rival even though Lowe's has the benefit of a fast-growing store base.

Home Depot is targeting comps growth of about 4% this year, with the key contributor being increased traffic from professional customers. These gains will be critical to the company hitting its long-term target of $100 billion of sales by 2018, which translates into 5% compound annual growth.

If Home Depot's story had been limited to just market-thumping sales growth, the stock likely wouldn't have soared 270% higher in the last five years. Instead, gushing profits are a big part of the investing thesis.

Home Depot's earnings have improved at a much faster pace than revenue. Net income last year was $7 billion, or 8% of sales, compared to $3 billion, or 5% of sales, in 2010. The retailer trounced its most comparable rival on this score, as is profit margin came roaring back from its 2009 low to almost double Lowe's result. 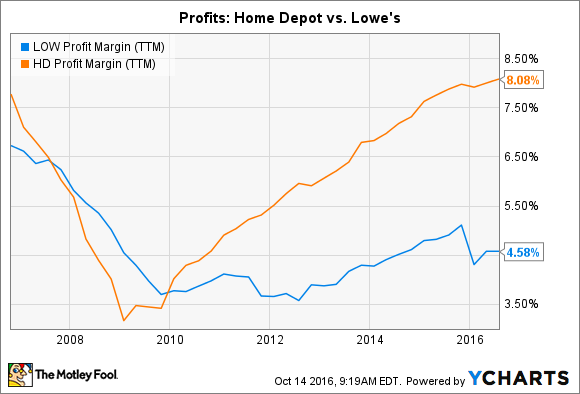 Strong earnings help Home Depot protect its market share lead while expanding into other areas like e-commerce. But the profits also have two direct impacts on shareholder returns. First, they fund significant spending on stock buybacks. Home Depot's outstanding share count is down almost 40% over the last decade, which helps explain why per-share earnings have grown at a stellar 22% compound annual clip over the last five years.

Second, higher profits translate into proportionally bigger dividend payments. Home Depot executives target returning 50% of earnings to shareholders in dividends (compared to Lowe's 35% promise) and so its stock owners get a huge raise every time the company has a good profit year. Right now Home Depot is paying over $3 billion per year in dividends, which is roughly what the company booked in total profits five years back.

Even with the current weak outlook for economic growth, Home Depot believes it will continue to grow at least through 2018. It faces plenty of risks to that goal, including falling customer traffic trends and market share losses to online rivals. Keep watching comps figures and profit gains, though, and you'll have a good idea at just how well the retailer is meeting these challenges.