As our lives become increasingly digital and connected, the amount of data our society generates has simply exploded. As just one example, roughly 90% of the world's data has been created in just the past two years alone, according to IBM.

To manage this explosion of data, a new crop of publicly traded big data companies has come to market in recent years, many of them relatively new IPOs. Big data stocks like Splunk (NASDAQ:SPLK), Salesforce.com (NYSE:CRM), and Workday (NASDAQ:WDAY) offer ways to invest in the long-term growth of the big data industry.

Though it might sound flimsy, big data powerhouse Splunk's business is to make something out of nothing -- or perhaps to say it more precisely, to yield insight when once there was none. As a bit of background, conventional data analytics platforms as we commonly know them rely on what's referred to as structured data, sets of information that have already been organized in some way -- think the market capitalization figures above, which are already organized around a central theme. That's structured data. However, the software that Splunk licenses to its customers operates further upstream in a company's digital reporting efforts, taking unstructured data -- the unorganized and disorganized digital noise produced by connected devices -- and parsing it for insight. 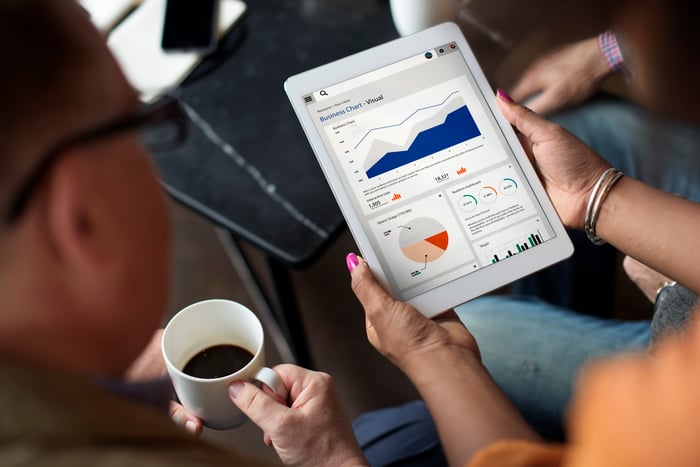 It's a tremendously hard technological task, and Splunk's leadership position has already earned it a legion of customers and the enviable moniker of "the Google of the Internet of Things." Much like the Big G, though, Splunk's budding empire will take some time to fully establish itself. As is common with similar growth companies, Splunk remains unprofitable at present, but it continues to grow sales like a weed.

Revenue is expected to rise 36% this year and 28% next year, by which point the analyst community expects the company to have reached regular profitability. Looking further into the future, Splunk's earnings per share is expected to grow at an annual average rate of 38% over the next five years. It's easy to get turned off by Splunk's admittedly aggressive valuation -- 9.7 times last-12-month sales and 117 times next-12-month EPS -- but Splunk's overall business opportunity and leadership within its market make it a strong contender to grow into and beyond its valuation today.

Cloud software giant Salesforce.com might not seem like an obvious big data play. However, as is happening throughout the cloud software industry, Salesforce has moved quickly to integrate big data functionalities into its suite of products.

Salesforce is best known for pioneering cloud-based software for corporate sales teams, known as customer relationship management (CRM) software in industry parlance. The company has in more recent years added a suite of other software offerings aimed at addressing other business verticals. Today, four main reporting segments drive Salesforce's revenue -- sales cloud (43% of sales), service cloud (29%), app cloud (17%), and marketing cloud (11%). None of these offerings explicitly deals with big data, but that is changing in important ways for both Salesforce and the broader industry.

Last May, the company launched its Salesforce Analytics Cloud platform to help integrate big data into its broader software offerings. The platform leverages AI and machine learning to parse data from a company's connected data sources to uncover trends that might otherwise go overlooked and recommend the most productive actions for sales and marketing teams. In this way, though Salesforce isn't a pure-play big data firm, it stands as a useful counterpoint to the likes of Splunk as an example of the way cloud software platforms are increasingly turning to big data to drive value for their customers, a trend further exemplified by Workday.

Check out Why salesforce.com Stock Skyrocketed Nearly 50% in 2017.

At its core, cloud HR and finance platform Workday might not seem like a big data play either. However, big data remains very much a part of Workday's mission to dominate the back office's cloud computing future.

Founded by software industry veterans, Workday's two best-known areas of operation are its cloud-based HR and finance software products. Though this area has become more diverse in terms of the actual software providers and the kinds of companies to which they cater, Workday explicitly aims to sell its products to large organizations like Netflix and Hewlett-Packard Enterprise. This strategy has helped fuel explosive growth: Workday's revenue has grown roughly 1000% since 2012, and the company's customer-centric business model should help cultivate strong recurring revenue, subscriber retention, and eventually profitability in the coming years.

In terms of Workday's big data chops, the company has continued to emphasize adding big data and analytics capabilities to its suite of services. In 2012, Workday unveiled its original Big Data Analytics toolkit. The cloud-based big data platform aimed at serving HR and finance departments integrates Workday's applications with other third-party enterprise software to -- as the company phrased it -- "make more informed business decisions based on a holistic view of worker and financial information."  The company has continued to add to its big data capabilities via acquisition as well, acquiring operational analytics and data discovery start-up Platfora this summer, as just one example.

As you can see, big data is impacting tech companies both new and old, and we've only witnessed the beginning of this big-ticket trend. Thankfully, there are any number of ways investors can cash in on this increasingly important trend, as the examples above demonstrate.