Stocks fell slightly last week as quarterly earnings results began to trickle in. The Dow Jones Industrial Average (DJINDICES:^DJI) and the S&P 500 (SNPINDEX:^GSPC) each lost less than 1% to hold at 4% gains so far in 2016. 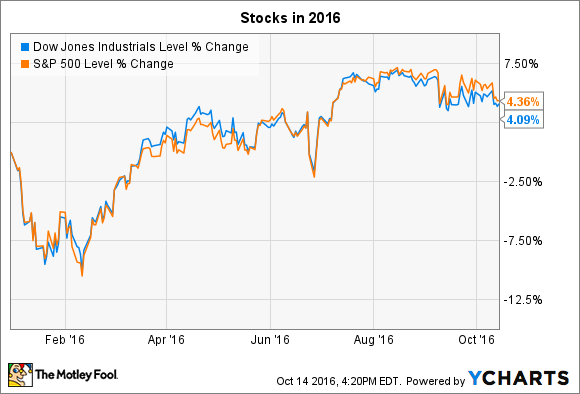 Netflix posts its quarterly report after the market closes on Monday, and investors might want to buckle up for some intense volatility. After all, the streaming video giant fell 13% on the day following its last quarterly report, which showed a surprising subscriber growth slowdown.

CEO Reed Hastings and his executive team aren't projecting much of a rebound this time around. Netflix is expecting to add just 2.3 million new users in the quarter compared to 3.6 million in the year-ago period. Challenges detracting from growth should include more defections tied to its price hike in addition to the negative impact of global attention turning to the Olympic games.

On the plus side, the company aims to post improving profitability, as a larger percentage of its U.S. member base rolls on to its pricier plans, and as international markets begin to mature toward positive contributions. Hastings will also have plenty to say about the company's ambitious content strategy that this quarter included the launch of its multi-year exclusive content deal with Disney.

Bank of America will announce its earnings results before the market opens on Monday. Despite solid gains over the last three months, the banking giant's stock is underperforming the broader market this year, and remains mired at a lower valuation than its peers.

That trend might not quickly change, especially as it appears that the current low-interest-rate environment will persist for years to come. That big-picture headwind can be seen pinching its results this quarter, even after last quarter's strong results. Consensus estimates call for earnings to fall to $0.33 per share from $0.37 per share in Q3, and for sales to stay flat against the prior-year period, at $20.9 billion.

The company can't do much about the cyclical pressure on its industry, but a focus on building up its loan and deposit balances while cutting costs should put it in position to reap big rewards when interest rates finally move higher. In the meantime, surprisingly strong results from its peers suggest that shareholders might be in for some good news this week.

Healthcare giant Johnson & Johnson is due to post earnings numbers on Tuesday morning. Judging by the stock's moves lately, investors are expecting to hear plenty of good news. Accelerating sales and profit growth over the last few quarters have helped JNJ rise 17% so far this year, making it the fourth-best performer on the Dow.

Last quarter, for example, revenue rose 5%, after accounting for negative currency swings, compared to a 2% boost for Procter & Gamble. And unlike its consumer-goods-focused peer, Johnson & Johnson saw market-share gains across its portfolio. CEO Alex Gorsky said at the time that executives are seeing "strong underlying growth across our enterprise." Investors are looking for more of the same this quarter: Consensus estimates call for earnings to jump 11%, to $1.65 per share, as revenue rises 4%.

Investors can look for the pharmaceutical giant to again be the standout performer, as Johnson & Johnson's huge commitment to research and development continues to produce a strong new-product pipeline. One-quarter of the healthcare giant's sales come from products launched over just the last five years, and keeping up that pace requires a constant stream of groundbreaking introductions.