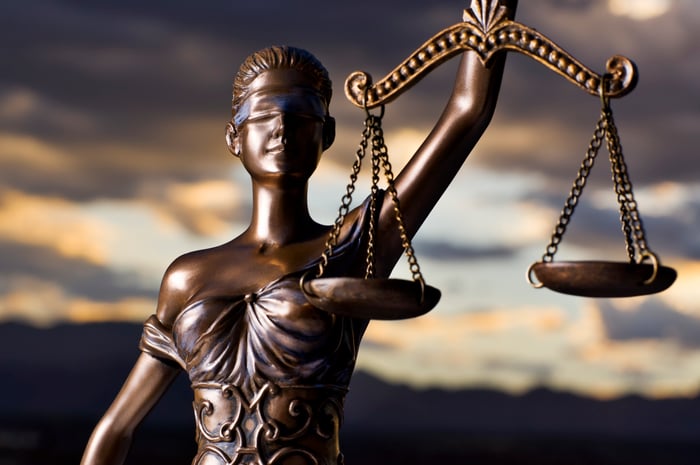 You'd be hard-pressed to find a community that hasn't had to deal with unrest over the use of police force in the past five years. But the aftermath of those situations has been starkly different; it either involves (1) peaceful protests that call for better solutions, or (2) destructive protests that reveal a level of distrust between police and the communities they serve.

One of the key differentiators is the presence of videotape. When it exists, the narrative is plain for all to see. The company that I think might be October's best choice -- TASER International (NASDAQ:AXON) -- is at the intersection of such crucial technology.

Much more than just stun guns

At its core, TASER hopes to accomplish two things: Protect life. Protect the truth. Protecting life has generally come from the company's eponymous product. When used correctly, it can disable a suspect for up to five seconds and allow police to gain control of a situation before it spirals out of control. The company estimates that over 170,000 lives have been saved since Tasers were deployed in 1994.

But the "protecting the truth" part is relatively new. TASER has expanded into body cameras with its Axon line of products. As of March of this year, 3,500 domestic police agencies helped push global purchases of Axon cameras past 174,000. Equally important, TASER has set up a cloud-based platform to combine all the data from Taser usage with video storage on the Evidence.com website (more on that below).

As you can see, Axon has become increasingly important over the years, and it is the key for my investment thesis. 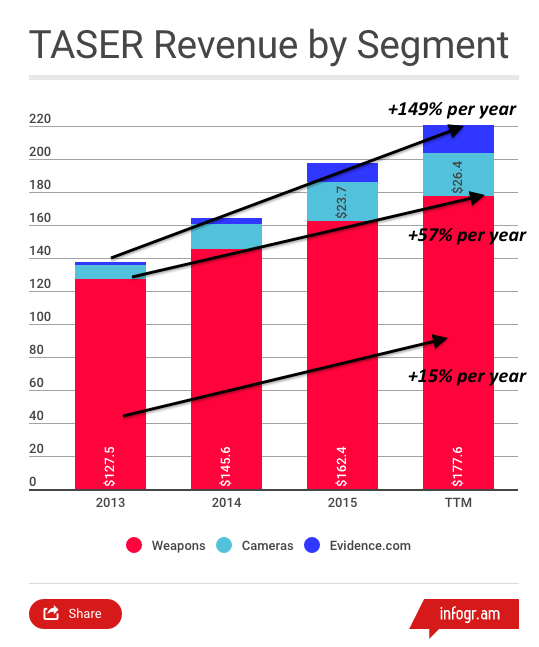 Technically, the Evidence.com cloud solution is part of the Axon segment, but I wanted to break it out to show how important it really is. The way that the platform works is that it combines all of the data from cameras with information provided by the Tasers about when and where they were used (a simple docking devices downloads this information).

TASER's cameras themselves have little moat surrounding them; the field of camera makers is crowded, and the company's aren't notably better than anyone else's. This was evidenced recently when the New York Police Department chose a rival to provide body cameras for its police force.

However, TASER does have two huge variables in its favor. First -- and most obvious -- is the fact that it has over two decades of relationships built up with police forces around the country. That's something that no other camera maker can claim. Second, and perhaps more importantly, is the Evidence.com offering. By combining data from Taser usage with a safe a reliable storage system for video evidence, once a police force signs on to use Evidence.com, the switching costs are sky-high.

Not only would it be cumbersome to have to train staff around the country on a new cloud-based system, but it would also present serious security issues, as much of the tape could represent critical evidence.

A price I'm willing to pay

Right now, shares of TASER have had a rough time. A Supreme Court decision not to hear a case where the use of a Taser was considered excessive force, combined with the NYPD decision, has sent shares reeling -- down 20% since late August. And to add insult to injury, the company still trades for an expensive 92 times earnings.

But I think it's worth looking a little deeper at this price tag. First, let's look at free cash flow (FCF). TASER generated $40 million in FCF over the past 12 months, and the company trades for 30 times that figure. That's still not cheap, but it's a whole lot better than 92 times earnings.

Furthermore, the company has been spending money hand over fist to capitalize on the opportunity it has with Evidence.com. Salaries for the Axon segment (which includes Evidence.com) increased by a whopping 117% last quarter, while sales and marketing spend jumped over 200%.

Those two line items alone wiped out an additional $3.2 million in income from operations. To put that in perspective, net income would have been 52% higher without that additional spending !

But when you have a product that has high switching costs and a large moat around it, this is the right move. The more customers TASER can get right now, the more locked-in revenue they have to pour in over the next decade. That's a short-term-pain, long-term-gain kind of trade that I'm willing to make every day of the week.

In the end, the company's mission of protecting lives and the truth, combined with its fair price and excellent business model, is enough to encourage me to buy a small position for my own portfolio when Motley Fool trading rules allow.