While the first half of 2016 was pretty dismal for biotech stocks in general, the sector began bouncing back in July. The iShares Nasdaq Biotechnology exchange-traded fund (ETF) (NASDAQ:IBB) fell nearly 30% by the end of June. By late September, though, the biotech ETF had regained roughly half of its year-to-date loss. Now it's going back down again in a major way. 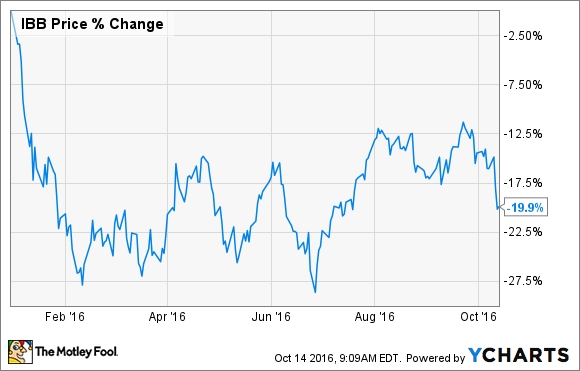 Worries about the upcoming U.S. elections are causing the latest biotech fizzle. Here's why biotech investors are terrified.

Hillary Clinton stoked fears among biotech investors over a year ago with a single tweet. Her tweet referenced a New York Times story about skyrocketing drug prices. Two companies were particularly highlighted in that story: Turing Pharmaceuticals and Valeant Pharmaceuticals (NYSE:BHC). Clinton promised in her tweet to "lay out a plan to take it [alleged price gouging] on."

The Clinton presidential campaign followed up on that promise quickly, unveiling a healthcare plan featuring a commitment to reduce the cost of prescription drugs. That plan included several provisions worrisome to biotechs, including lowering the biologic exclusivity period from 12 years to seven years.

A few months later, still competing for the Democratic presidential nomination at the time, Hillary Clinton escalated the attack. Her campaign aired a television commercial stating that she was "going after" Valeant Pharmaceuticals for its "predatory pricing." Valeant's stock, already falling due to several issues, took yet another clobbering.

But it wasn't just Valeant that was affected by Clinton's focus on drug prices. It's fair to say that much of the decline earlier this year with the iShares biotech ETF stemmed from the political campaign.

The latest biotech pullback appears to have more to do with Hillary Clinton's opponent, Donald Trump. It's not that Trump's proposed policies threaten the biotech industry. Instead, it's that he might make it much more likely that Hillary Clinton's plans will actually be implemented.

Nate Silver and his team at FiveThirtyEight try to calculate the probability that either of the candidates will win the presidency based largely on major polls. I don't think it's a coincidence that the iShares biotech ETF's performance tracks pretty well with the probability that Trump will be elected as president.

Perhaps even more important for biotech stocks is who will control the U.S. Congress. FiveThirtyEight's view of the likelihood that Republicans lose their majority in the Senate has increased over the past few days in the wake of the controversy over some of Trump's comments. On Oct. 9, the estimated probability that Democrats regained control of the Senate was only 51%. Now, FiveThirtyEight projects a 60% chance of that happening.

Biotech investors are afraid about how the stocks they own might be affected by potential healthcare policy changes, and those fears are probably warranted?

Hillary Clinton wants to create a team consisting of representatives from various federal agencies to focus on "protecting consumers from outlier price increases." Potential ways to accomplish this goal include fining companies that increase prices that the government considers to be unjustified. This proposal appears to be the fulfillment of Clinton's promise to "go after" Valeant and other companies that dramatically hiked drug prices.

Another idea that could be enacted is to eliminate tax write-offs for direct-to-consumer advertising costs. This proposal could sting but shouldn't hurt biotechs too badly.

A couple of years ago, AbbVie (NYSE:ABBV) ranked as the second-biggest advertising spender among drugmakers. The biotech spent around $363 million on advertising, over half of which was for blockbuster anti-inflammatory Humira. Losing tax deductions for that amount wouldn't be a good thing for the company. However, the financial impact to AbbVie's bottom line would be small enough that it shouldn't have any significant effect on the stock.

The proposal to lower the biologic exclusivity period is another story. For example, AbbVie hopes to win regulatory approval in the not-too-distant future for risankizumab. The anti-inflammatory drug is in a phase 3 study for psoriasis and in phase 2 studies for Crohn's disease and psoriatic arthritis. If risankizumab has exclusivity for 12 years, the drug should generate significantly more revenue than if it only has exclusivity for seven years.

Could AbbVie simply raise the price to make up for losing exclusivity sooner? Considering that the rationale behind Hillary Clinton's proposal is to lower prices, it doesn't seem likely that the federal government would make it easy for biotechs to price their products higher. AbbVie (and other biotechs) could be looking at a negative financial impact in the billions of dollars if the proposal to reduce exclusivity periods is enacted.

There could be one group of stocks that performs well with the proposed changes, though: major developers of biosimilars. Clinton proposes making it easier for biosimilars to gain approval. This could help generic drugmakers that focus heavily on biosimilars. It could also help some biotechs to a lesser extent. Amgen, for example, has nearly as many biosimilars in development as it does new drugs in late-stage development.

Biotech investors do have legitimate reasons to be concerned. On the other hand, companies have faced potentially adverse government regulation changes in the past and adapted successfully. Regardless of what happens in the U.S. elections, well-run biotechs will continue to survive and thrive over the long term.