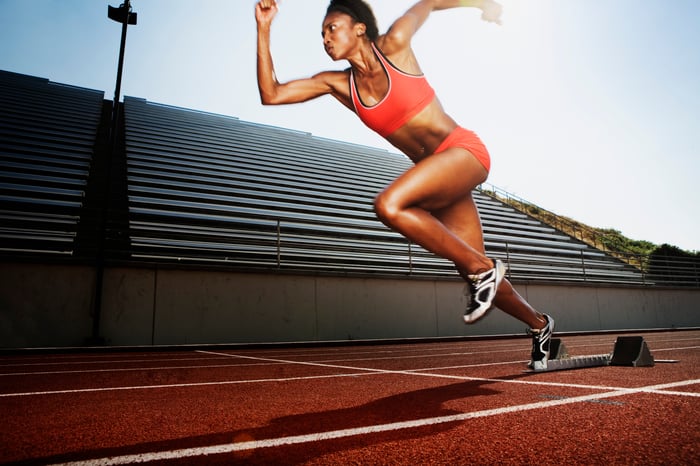 The effects of cord-cutting have manifested themselves in various places and in varying forms in recent years, even in segments of the entertainment business once considered immune, like the sports industry. To gauge which areas of the sports business are most likely to thrive amid the rise of cord-cutting, we polled The Motley Fool's 635,000 and growing Twitter followers. See the results for yourself:

Which would you most like to own a piece of for the remainder of your life? #NFL $DIS $NKE $UA

Say what you will about it, but the NFL is a cultural pillar to many. Writer Rich Cohen nicely captured the NFL's cultural importance in a 2014 essay in The Wall Street Journal, saying, "Professional football, like no other game, clearly represents America -- the good, bad, loud, violent, ugly and beautiful," a fact certainly supported by the League's business results.

In 2015, the NFL raked in an estimated $12 billion in revenue. Commissioner and public opinion lightning rod Roger Godell hopes to increase NFL revenue to $25 billion by 2027. However, the true value of the NFL lies in its 32 franchises, which have skyrocketed in value in recent years due in no small part to their scarcity. According to Forbes' annual analysis and ranking of sports franchises, the average value of an NFL team today stands at $2.34 billion, up 19% from 2015. And with the NFL and its 32 owners having complete control over the number of teams in the league, its lucrative TV deals, its international growth efforts, and the like, it's fairly safe to say that owning a piece of the NFL would be fantastic investment, as our Twitter followers duly noted.

However, since it's impossible to own stock in the NFL -- though shares of the Green Bay Packers can be bought during the occasional stock sale -- let's review the other sports industry powerhouses that are actually available to the average investor.

In all honesty, our Twitter survey didn't contain any "wrong answer." Even if you can't necessarily own one of the NFL's 32 teams, or the NFL itself for that matter, Disney-owned (NYSE:DIS) ESPN, Nike (NYSE:NKE), and Under Armour (NYSE:UAA) are all compelling investment opportunities in their own rights.

Though Disney has diversified its revenue streams, ESPN remains the largest single contributor to the House of Mouse's operating profits. The main concern that has hampered Disney stock in recent months is that the erosive effects cord-cutting has had on ESPN subscribers could worsen somehow. Thus far, Disney has been able to offset lost revenue from falling subscriber counts through annual increases in the price-per-subscriber it charges cable distributors. Disney is gradually taking steps to adjust to the cord-cutting future and investing in emerging digital media platforms. More broadly, the Disney organization owns some of the most coveted intellectual property assets in the world, and it's an expert on developing and monetizing those assets. With the stock trading at a compelling 16 times earnings, Disney arguably represents one of the more compelling stocks the market today.

In a very real sense, Nike and Under Armour both operate as different sides of the same coin. Though Under Armour remains an upstart next to the global colossus that is Nike, both companies are proven operators and innovators in branded sportswear. In fact, it's probably fair to say that Under Armour is in many ways this generation's Nike. Case in point, these head-to-head competitors are both recommendations in at least one of the Fool's premium services; Disney is as well.

As the more mature of the two, Nike is slower-growing but more profitable. For example, Nike produced a 15% operating margin over the past 12 months. Under Armour's operating margin during this period was just 10%. However, Under Armour's sales have soared over the past five years from $1.4 billion in 2011 to $3.9 billion in 2015. Nike, on the other hand, saw sales rise from $23 billion to $32 billion; at a 39% increase this is by no means a disappointing number, but not nearly as brisk as Under Armour's 179% rapid expansion. Both companies are led by visionary leaders and continually churn out products consumers love.

At the end of the day, it's hard to go wrong investing in either Nike or Under Armour. The same can be said for Disney. Unfortunately, they aren't quite the same as owning the NFL, but Disney, Nike, and Under Armour are all fantastic investment opportunities for long-term investors.