From the perspective of their benchmark interest rates, they are looking increasingly similar. The United States has now experienced eight consecutive years where its primary short-term interest rate benchmark has been, for all intents and purposes, 0%. In this way, the American economy is starting to look more and more like that of Japan, which has seen short-term rates near the "zero-bound" for more than two decades.

For investors in banks like Bank of America (BAC -0.28%), JPMorgan Chase (JPM -0.48%), and Wells Fargo (WFC -0.15%), this has significant implications, as all of those institutions will make much more money if and when rates eventually rise. 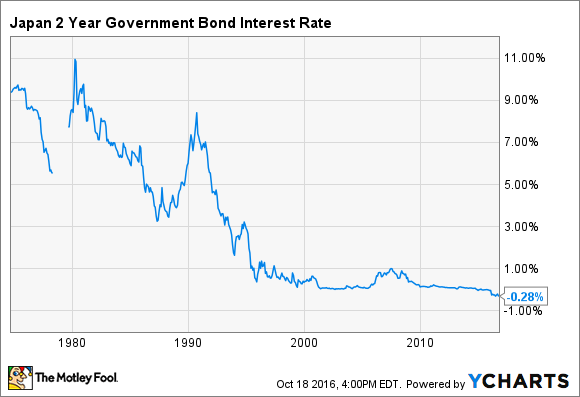 To be clear, there's no question that the U.S. economy has stronger fundamentals than Japan's, which should give investors hope that rates here won't stay as low for as long.

Most importantly, we have population growth, while Japan doesn't.

Over the past five years, Japan's population has shrunk by 1 million, according to The Washington Post. That equates to somewhere around a negative 0.2% annual growth rate.

By contrast, while there aren't enough babies born in the United States each year to offset deaths, the population is still growing thanks to positive net immigration. The latest data shows that the U.S. population is expanding at somewhere around 0.8% a year.

On top of this, we've learned over the past decade that the United States is sitting on some of the greatest oil and natural gas reserves in the world. This is an enormous advantage, given that economic growth is literally and figuratively fueled by energy.

Japan, by contrast, is the second-largest net importer of fossil fuels in the world, behind only China. This was one of the principal reasons, in fact, that Japan tried to expand its territorial empire so aggressively in the lead-up to World War II.

But even though our economy is predicated on stronger fundamentals than Japan's, that doesn't mean that interest rates are bound to rise anytime soon. Sure, the Federal Reserve increased the fed funds rate by a token 0.25% last December, but it's since been reluctant to go further.

Analysts and commentators in the financial community talk about this in the context of "normalized" interest rates. The underlying assumption is that rates will at some point return to historically "normal" levels given inflation expectations over a long period of time.

But the problem with this assumption is that there's simply no such thing as a historically normal interest rate. One could even go so far as to argue that the most normal rates we've experienced since the mid-1950s are the ultra-low rates right now.

As you can see in the chart below, this has been the only period in which the Fed Funds rate has held steady for a long stretch of time. 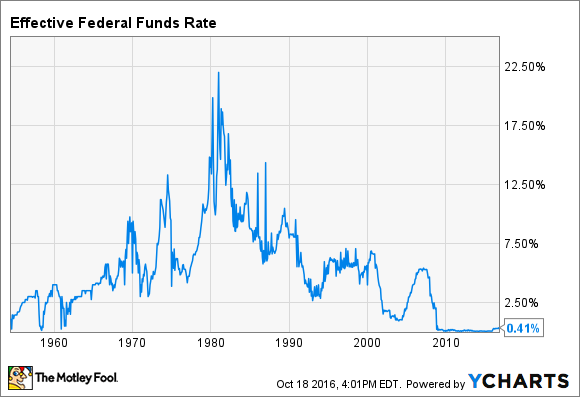 Anyone who invests in bank stocks needs to take note of this. The primary bull thesis right now underlying shares of Bank of America, JPMorgan Chase, Wells Fargo, and others, is that they will make gobs more money once rates rise.

The point here is that interest rates are the single most important catalyst for bank stocks, but we have no idea if or when they'll rise. You should accordingly approach the sector with humility.