By far, the most repetitive sentence I've had to type amid monthly sales results over the past few years has been something along the lines of: "Of course, Fiat Chrysler Automobiles' (NYSE:FCAU) sales gains were led by Jeep." It seemed as if every single month Jeep took the prior year's monthly sales record and trounced it by double digits. Don't believe me? Take a look for yourself. All good things come to an end

Part of Jeep's success was due to the fact that it was pushing out refreshed models as well as all-new models (Renegade), and that the love affair between Americans and SUVs was accelerating. But alas, that couldn't last forever, as much as FCA investors hoped.

Just last month, Jeep's long-standing record of year-over-year sales gains came to an end as its sales declined 3%. It was the first monthly decline since September 2013, before my chart above began tracking. Despite the Jeep Grand Cherokee and Patriot posting individual gains of 18% and 33%, respectively, compared to the prior September, it wasn't enough to offset the performance of the rest of the Jeep lineup: Wrangler sales fell 18%, Compass sales declined 16%, and the Cherokee and Renegade posted 12% and 13% declines, respectively.

"I don't know that the bloom is off the rose so much, but the level of competition is very, very fierce right now," said Rebecca Lindland, senior analyst with KBB.com, according to Automotive News. "Virtually every company, both luxury and nonluxury, is coming out with all different sizes of crossovers and SUVs. That's been Jeep's sweet spot for so many years."

A bad mix of events

Lindland is right. Despite Detroit autos being well known and respected for producing SUVs, one glance at a chart of the top 10 vehicle sales during September shows a far different landscape for Japanese SUVs than in the past. Honda's CR-V outsold any vehicle that wasn't a full-size pickup, with Toyota's RAV-4 not far behind. The next best-selling SUV/crossover was Nissan's Rogue, and finally in the 11th slot Ford's Escape makes an appearance.

That isn't a one-month wonder, either, as those SUV/crossover year-to-date sales rank out the exact same way. Not only is the competition increasing, but total new-vehicle sales are also plateauing, making year-over-year comparisons that much more difficult.

The potential impact of General Motors' recently revived Chevrolet Colorado and GMC Canyon, which could be substitute products for some Jeep consumers, must be taken into account. On that note, the competition isn't going to lighten up anytime soon, as Ford's all but confirmed the Bronco SUV will be revived in the U.S. -- which could be Ford's most direct jab at Jeep's lineup in a long time. Ford's Ranger, which could have a similar impact on Jeep as GM's sister midsize trucks, is also slated to come back to the States. 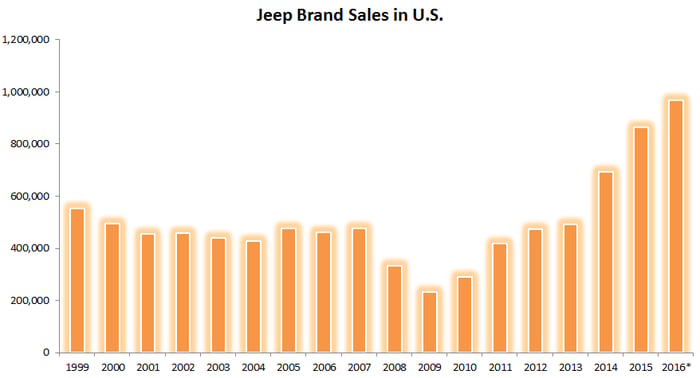 To be fair, demand for Jeep products won't be falling off a cliff anytime soon, and the brand's total sales are still trending higher for the year. However, the double-digit gains witnessed in recent years are going to be few and far between. The problem will be if Jeep has to raise incentives to remain competitive, because Jeep has been, along with FCA's Ram Truck brand, one of very few bright spots for the automaker. Jeep hauls a lot of the automaker's profits, and if demand wanes, it will hinder FCA's ability to fund its massive, companywide turnaround project -- and that's not something any investor wants to hear.

Why Jeep Finally Faltered, and Why It Matters @themotleyfool #stocks $F $GM $FCAU Next Article
Current