As two of the largest competitors in the $320 billion global market for athletic footwear and apparel, Nike (NYSE:NKE) and Adidas (OTC:ADDYY) are no strangers on the gridiron that is the business world. In the earlier part of this decade, Nike had seemingly solidified its place as the top dog in the athletic-apparel market, while Adidas' market share fell. It seemed Adidas simply couldn't keep pace against more innovative American rivals like Nike and Under Armour. However, the past year has represented something of a reversal of fortunes at Adidas, its stock price has rallied impressively in the past 12 months. 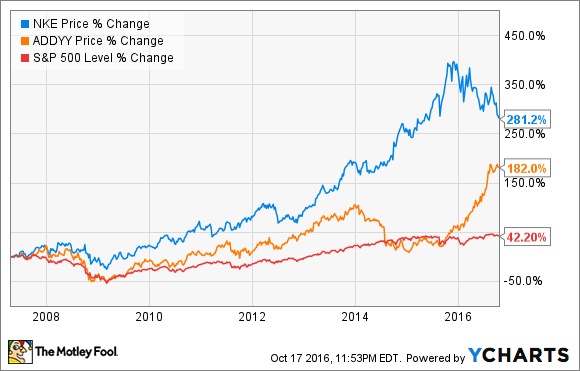 Considering their divergent paths in the past year or so, which sportswear stock is the better buy today -- Nike or Adidas? Let's examine several of the most important aspects of any investment to find out.

On the whole, both Adidas and Nike seem to enjoy relatively stable financial fundamentals. Here's a quick snapshot of a few pertinent metrics for the two companies.

It's important to note that size also plays a factor here. Nike's revenue base is nearly twice as large as Adidas', so Nike should handily best Adidas across each of these categories on an absolute basis. Overall, both companies appear to be in perfectly fine financial shape, with operations that can easily fund themselves and pay down any existing obligations. Especially since the majority of both companies' debt load is long-term debt that comes due years in the future, the debt on Nike's and Adidas' respective balance sheets shouldn't be viewed as a problem. Since there isn't a clear advantage in this section, investors should look for other possible differentiating factors to distinguish one as the better buy.

Investors love companies that have built themselves durable competitive advantages, or, as superinvestor Warren Buffett would describe them, moats. Businesses can develop such advantages in any number of ways, but this important trait has a lot to do with driving long-term outperformance. Does Nike or Adidas win out in this category? The following chart says quite a bit.

Nike's above-average performance across profitability and return on capital metrics really stands out here, speaking to the fact that Nike likely enjoys some kind of durable competitive advantage. The case for Adidas enjoying its own moat isn't nearly as convincing. Upon deeper reflection, this makes perfect sense.

Though we tend to not think of it this way, both Nike and Adidas effectively sell commodity products -- athletic shoes and apparel. However, Nike is able to wring more profit from its products than Adidas or the average company in its industry, and that isn't an accident. Nike's competitive advantage lies in a few unique traits to its business that I think indeed give the company a meaningful, long-term competitive edge over its competition.

For starters, Nike's leading product development team is recognized for the consistent innovations, going all the way back to the 1980s, when it introduced air-filled insoles. Additionally, Nike's massive size also allows it to more meaningfully leverage economies of scale in production and distribution. Then there's also what's undoubtedly Nike's single greatest asset: its brand. Nike supports its universally recognized brand with a $3 billion annual advertising budget. It's for that reason that Nike's brand was ranked as the 18th most valuable in the world in branding consultancy Interbrand's 2016 ranking. Even here, Nike's estimated $25 billion brand value stands head and shoulders above Adidas' estimated brand value of $7.8 billion, which was still good for a respectable 60th place on Interbrand's ranking.

Any company can be a buy at the right price. However, examining several commonly used valuation metrics reveals that neither Adidas nor Nike seems like an obvious bargain.

Rather, Nike and Adidas both seem to generally fall in line with the overall industry averages. This makes sense since both are well-established large-cap companies with extensive coverage from the analyst community. With so many eyeballs following Nike and Adidas stock, it's understandable that both will be somewhat fairly valued. Here, there's no hands-down winner, so it makes sense to call the valuation analysis a draw.

With Nike handily winning the competitive-advantages portion of this review, the American athletic-apparel giant earns the title of better buy in this analysis. Especially given the strength of Nike's economic moat, the company seems like the definition of a Warren Buffett stock: a great company selling at a fair price. Adidas certainly has plenty going for it, but Nike's size, profitability, innovative spirit, and similar pricing clearly make it the better buy today.