Please ensure Javascript is enabled for purposes of website accessibility
Free Article Join Over 1 Million Premium Members And Get More In-Depth Stock Guidance and Research
By James Brumley - Jan 6, 2021 at 8:00AM

Just because a company is moving in the right direction doesn't make it the industry's best bet.

It's certainly not the biggest or most notorious name in the athletic apparel business. Nevertheless, adidas ( ADDYY 0.28% ) remains a respected player in the market, having proven its staying power even when things turned tough for the company.

Not even the pandemic was enough to prevent adidas' brand from connecting with consumers. While profits are down, 2020's revenue is ultimately expected to match 2019's. This year's projected sales growth of 20% would mean a record-breaking top line.

Mere forward progress isn't necessarily good enough, however, when alternative investments like Nike or Under Armour are available. Not even the prospective sale of its struggling Reebok brand would make adidas the best-of-breed business to own among athleticwear stocks. 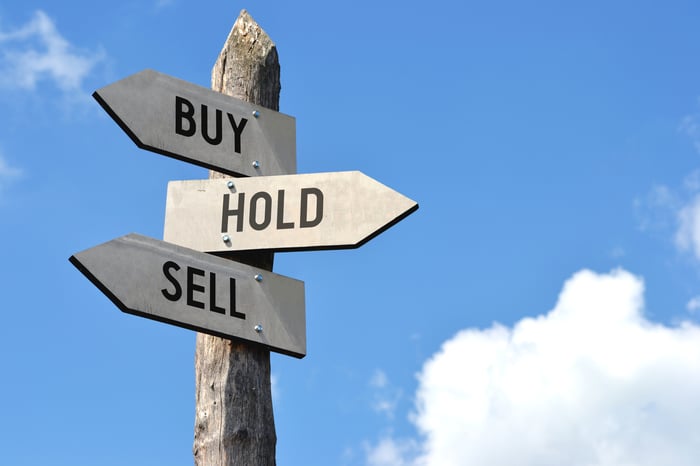 Exiting 2020 on the right foot

Kudos to adidas. The company was already working on a bigger and better online presence before the COVID-19 contagion took hold. When the unexpected need suddenly materialized early last year, the organization was ready. E-commerce revenue was up 51% year over year for the third quarter, following the second quarter's 93% year-over-year improvement. The company hasn't disclosed 2020's exact online sales figures, but it did indicate during its first-quarter conference call that it was targeting 4 billion euros' (about $4.5 billion) worth of e-commerce sales for all of 2020. For perspective, adidas did 23.6 billion euros' worth of business in 2019.

The company isn't turning down the heat on this front, either. As more and more of its retail distributors hit the retail apocalypse wall, adidas is taking matters into its own hands. CEO Kasper Rorsted said last month that he intends to open more Reebok stores in the near future, melding them with the company's e-commerce platform to build a much more engaging omnichannel experience. It's a smart step toward the new normal of retailing.

Better still, last month the company announced it was seeking "strategic alternatives" for the struggling Reebok brand, which it acquired in 2006. That most likely means a sale of Reebok, which many observers say was never quite a fit for adidas. With more time and resources to focus on the adidas brand, its growth may well accelerate even more than it has under Rorsted's guidance.

These all seem like steps in the right direction, and they are. As it stands right now, though, adidas has more challenges in front of it than solved problems behind it.

Too many challenges ahead

One of those hurdles? By selling Reebok now, adidas may actually be selling a surprisingly decent growth engine that's just starting to rev.

It's not a big part of the company's business. Reebok accounted for less than a tenth of 2019's total revenue. Reebok's 2019 sales were up nearly 4% year over year, however, marking the first growth it had seen since Rorsted began working on turning it around when he took the helm in 2016. Perhaps more importantly (though without offering any specifics), the company has since acknowledged that Reebok inched back into the black in 2018, two years ahead of schedule. New growth initiatives may have pushed it back into the red for 2019, and 2020 ended up being a bust for obvious reasons. But it's progress.

There's a downside to a sale now, however. For the past four years, most of adidas's seemingly best ideas -- like a tie-in with UFC superstar Conor McGregor and a return to its fitness roots -- were arguably used up by the Reebok brand. Although any intellectual property and ad agency exclusiveness will likely remain with adidas after a Reebok sale, the smaller brand's new owner will inherit the marketing momentum adidas has already been able to build for the footwear name. Ergo, Reebok's new owner would hit the ground running as a clear, legitimate competitor.

And if Reebok isn't sold? Then distracting confusion persists. Adidas and Reebok don't necessarily appeal to the same consumer, which may lead to confusing marketing messages.

Then there's the 800-pound gorilla in the room: Nike. Neither adidas nor Reebok (combined or separately) are going to topple it online any more than they did offline. The best they can hope for is to contain it.

The numbers: Nike boasts more than 1,000 of its own stores, and in fiscal 2019 -- before COVID-19 -- direct-to-consumer sales (online as well as Nike stores) reached $11.8 billion. That was more than a fourth of its total business that year; adidas's e-commerce didn't likely become a fourth of its total revenue in 2020's rich online shopping environment. Nike's digital sales growth has also easily outpaced adidas's online sales growth since the contagion started to shutter stores.

Clearly Nike is connecting with consumers online in a way that adidas has yet to figure out.

Don't misread the message. Adidas is hardly doomed. There's room for a second-, third-, and even fourth-place contender in this arena, and this particular company is expected to see measurable growth going forward. Data source: Thomson Reuters. Chart by author. All figures are in euros.

For investors, though, adidas just isn't the lower-risk, higher-growth prospect that Nike is at this time.

So, no, adidas isn't a millionaire-maker kind of investment ... unless you're really close to being a millionaire already. For now it's mostly a name to watch, especially now that Reebok could be on the chopping block.

Where Will Adidas Be in 5 Years?