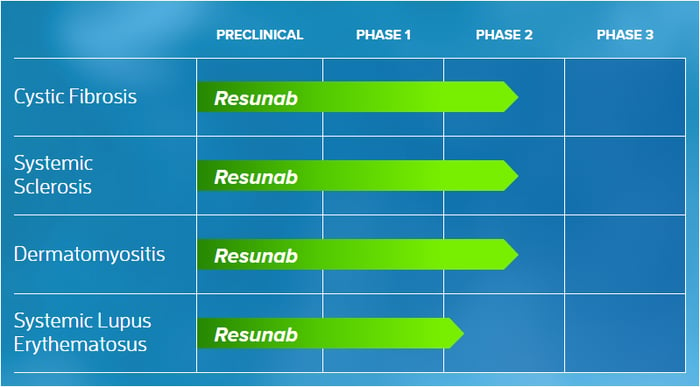 Cobus may only have one drug, but it's testing Resunab in multiple indications. Image source: Corbus Pharmaceuticals.

Corbus Pharmaceuticals (NASDAQ:CRBP) is up over 13% at 3:37 p.m. EDT in late-day trading, presumably because the biotech's CEO Yuval Cohen is scheduled to be on Jim Cramer's Mad Money tonight.

You've got to love the short-term traders. Get in before everyone else hears about the relatively small biotech tonight; get out tomorrow as everyone else buys in.

Chastising aside, there are good reasons for investors to look at Corbus Pharmaceuticals right now, and it's understandable why Cramer would want Cohen on his show.

Corbus is testing its anti-inflammatory drug Resunab in three different phase 2 clinical trials with a fourth one set to start in the first half of next year. Patients in the first of those trials completed treatments earlier this month. Now Corbus is processing the data for the 42 patients with systemic sclerosis in the trial, and plans to announce the top-line results by the end of the year. With about 90,000 people in the U.S. and Europe, the market for systemic sclerosis is a decent size, but still small enough to gain Corbus Pharmaceuticals orphan drug status for Resunab.

Positive results in systemic sclerosis would give investors confidence that Resunab might work in cystic fibrosis and a skin disease called dermatomyositis. Corbus is already testing the drug in phase 2 studies, as well as for lupus, in which a phase 2 trial is scheduled for next year.

Corbus is a biotech with an upcoming binary event, and long-term investors are likely at the whim of short-term traders. Today shares are up; tomorrow they could be down, but it doesn't really matter what happens between now and the data release because shares will eventually settle at whatever valuation is dictated by the quality of the data.