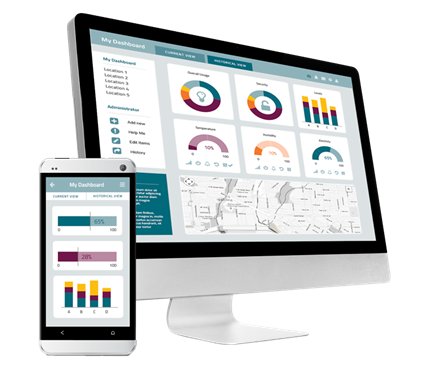 The number of devices getting connected to the internet is accelerating, and investors are jumping on board. Much of the buzz is about the hardware and the smart devices themselves, such as watches, lightbulbs, and thermostats, but as the Internet of Things (IoT) expands, the longer-term opportunity is in the software and services that run those devices.

How big is the IoT?

An oft-cited study  from tech researcher Gartner shows the number of IoT devices more than tripling in the next few years. By the end of this year, the estimate is for 6.4 billion devices to be in use. That swells to nearly 21 billion by 2020. Other estimates put the figures even higher than that.

The thought of billions of new devices coming online in the next few years has increased interest in many of the companies that sell those products to consumers. Though some of these companies stand to continue growing in the years ahead, investor interest has driven some valuations sky-high. Take smartwatch and connected fitness device maker Fitbit (NYSE: FIT) as an example.

Even after a big tumble in share price at the beginning of the year, the price-to-earnings ratio for the past 12 months' worth of profits are still on the high end for Fitbit, near 29. The market is pricing in massive profitability growth in the year ahead, as indicated by a significantly lower one-year-forward price-to-earnings ratio of only 9.6. It remains to be seen whether the device maker can pull that figure off and reward investors' high hopes, but the numbers illustrate the lofty expectations many have for the hardware side of the IoT.

However, one fact often missing from the IoT discussion is that, while the number of devices is expected to triple in the next few years, spending on the IoT is expected to only double over the same period of time. That implies two things: (1) The cost for the average connected device will fall over time and (2) device sales will eventually slow down. With all the rage in IoT surrounding the hardware, the real point of the IoT is getting overlooked: the convergence of the real world with the software world.

Phase 2 of the IoT

At some point, the number of new connected devices will start to level out. This scenario is played out again and again in technology, from the PC to the smartphone to the tablet. As has been the case in the past, when hardware sales slow, the software that runs the machines becomes the important focus.

So, which software companies should investors home in on for the long-term shift to software? Two obvious places to look would be software-as-a-service juggernauts Oracle and salesforce.com. Both companies provide software for businesses and enterprises.

Not to be overlooked, though, are the hardware suppliers and designers that sell the devices and chipsets that connect the devices to the internet. Besides earning revenue from the sale of the chips, many of these companies have developed or are developing platforms to make software developers' lives easier. Many of these platforms get sold as software as a service, providing a stable income source long after the device itself has been sold.

The thinking behind these platforms is that whichever company can provide the cleanest-looking total package -- the internet-connection-enabling hardware together with the software-developing platform that makes the device run -- will be the winner in the long term. This recurring service revenue is still a small portion of many suppliers' total revenue, but that stands to change as more devices get connected. Here are a few examples of companies worth a look.

Cypress (NASDAQ:CY) has historically focused on digital memory, power management, and microcontrollers, but in July the company bought the IoT segment from Broadcom. The $550 million transaction made Cypress the largest IoT chip maker in the world, and the deal included Broadcom's WICED software-development platform.

After its big purchase, Cypress swung to a net loss. However, the company recently announced an 8% cut to its workforce to reduce costs, and rumors of private equity interest in the company have been circling since new CEO Hassane El-Khoury took over back in August. That point aside, Cypress' position as the leader in providing the parts for smart devices, as well as providing the tools for software developers to get those devices online, makes it an attractive holding for the long term.

Shares have recently trended down as short-term sales concerns have come up and the company's new clients aren't turning into new revenue as quickly as initially anticipated. However, with shares off over 30% from this summer's highs, now looks like a good time to consider a purchase.

Digi International (NASDAQ:DGII) also provides design and build solutions for wirelessly connected devices, primarily for businesses and municipalities. However, the company also has cloud-based device-management software and food-monitoring devices and supporting software it sells as an ongoing service subscription.

Shares are down over 10% from highs earlier in the summer and from similar highs reached this time last year. This comes in spite of top- and bottom-line growth so far in 2016 compared with last year and a recent increase to management's full-year profit guidance. The company's recurring service revenue is down from last year, although it only accounts for 3% of total sales. But the company's food-monitoring service continues to be developed and just inked a new deal with Canadian food distributor Telus.

As the Internet of Things continues to reshape the world we live in, it will be easy to gravitate toward the makers of the devices we see. For investors looking further out into the future, the implications for IoT go beyond just the devices themselves. It's really all about the software -- it will become an ever more important part of the revenue picture for companies that operate in this space. To round out your technology investments, you cannot ignore software and service providers that will run the IoT.