Editor's note: A previous version of this article incorrectly stated that Brown-Forman's Jack Daniel's brand had not made the Interbrand list of top 2016 brands. The author and the Fool regret the error. 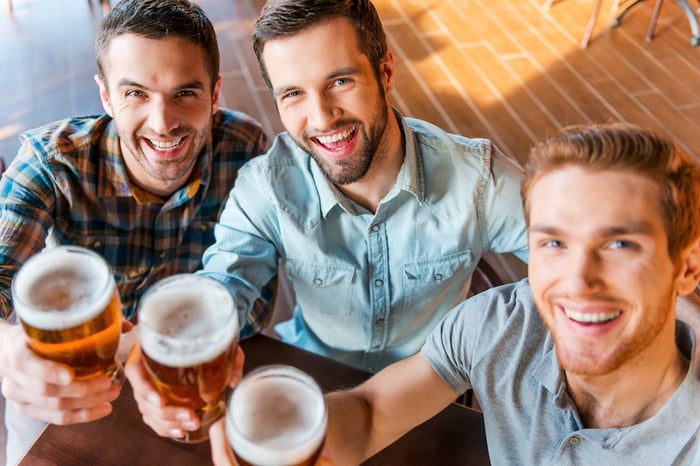 Now that Anheuser-Busch InBev (NYSE:BUD) has completed its acquisition of SABMiller, the $104 billion deal has created a beer-brewing behemoth that straddles just about every continent and has operations, sales, or employees in just about every country.

The maker of Budweiser, Bud Light, and Corona beer is truly a global powerhouse that accounts for more than a quarter of the world's beer production, 45% of the industry's profits, and owns the first and/or second top-selling beers in more than a handful of markets, including the U.S., where it will continue to have a 45% share of the market.

The merged company is also the fifth largest consumer products company in the world, behind such giants as Procter & Gamble and PepsiCo, but ahead of Coca-Cola and Mondelez International. Together, A-B InBev and Miller will have $55 billion in annual revenues and around $21 billion in earnings before interest, taxes, depreciation, and amortization, more than any other consumer products company.

A beer by any other name

According to brand consultancy company Interbrand, Budweiser by itself was already the biggest global alcohol brand valued at $15.1 billion, up 8% from last year's ranking and one position higher.

Interbrand puts a lot into determining a brand's value. The ISO-certified methodology looks at how a business delivers on customer expectations to what it does to drive economic value, with the rankings based on a brand's cumulative value in three key areas:

From that assessment, it organizes the list of top 100 companies. In the 2016 survey, the Budweiser brand came in 30th; last year it was 31st. That it was the biggest adult beverage brand probably surprises no one, but like me, you might have wondered which alcohol brands followed after.

Can you guess who's on top?

I examined Interbrand's list of the best global companies and sifted out only those that made adult beverages. On more than one occasion, I raised an eyebrow at which company was there and which wasn't, but the following list identifies the most valuable brands, their Interbrand rank, and their brand value:

One trend that stands out is the even split between beer and spirits, indicating there is no real difference between highbrow and lowbrow tastes. The absence of any of Miller's beer brands is also notable.

That's particularly interesting because A-B InBev just acquired Miller on the strength of its global brand portfolio, particularly its leading position in countries such as Africa and Latin America (albeit for brands not under the Miller label).

Also, aside from Anheuser-Busch having two brands on the list (Bud and Corona), the only other company to earn that distinction is distiller Diageo (NYSE:DEO), which owns the Johnny Walker brand of Scotch whisky and Smirnoff vodka.

Everything tastes better with Jack

The Jack Daniel's family of whiskey accounts for 55% of Brown-Forman's (NYSE: BF-A) (NYSE: BF-B) depletions, or shipments sent directly to retail or from distributors to wholesale and retail customers, a metric that is commonly regarded as a proxy for consumer demand. Its original black label Old No. 7 accounts for 55% of all the distiller's brand depletions and 30% of its total portfolio.

Moreover, Jack Daniel's has the distinction of being the fourth largest premium spirits brand and the biggest selling brand of American whiskey in the world. Yet having such a powerhouse brand also runs the risk of Brown-Forman being a one-trick pony that needs to always come up with variations on a theme.

And that it has, and it's done so quite well, thank you. Tennessee Honey, a honey-flavored whiskey as its name suggests, is already the world's 15th largest premium brand, and its cinnamon-flavored Tennessee Fire is taking aim at Sazerac's leading Fireball brand.

There's little question as to why people can walk into any bar a simply say they want a "Jack" and bartenders understand what they mean.

Why Heineken is a top-shelf brewer

As Heineken (NASDAQOTH: HEINY) calls itself, it is "is the world's most international brewer," led principally by its premium eponymous brand that is sold in more than 170 countries. It's also the second-biggest beer brand on the Interbrand global list.

Heineken beer represents just 15% of the brewer's total volume, but it accounts for well over 30% of its profits. The company still sees another 10 to 20 years of growth ahead of it.

When investors look to invest in alcoholic beverage companies, once having made the choice to put their money into beer, it's often a case of looking at the biggest, like Anheuser-Busch InBev, or in the niches, like craft beer. However, imports are certainly worth taking note of as the Brewers Association, which represents the craft beer industry, notes, import beer volumes grew 6% in 2015, accounting for a 22% share of the market -- almost double craft beer's share. Now, as sales of craft beer eases up, imports can shine through.

As Heineken's Most Interesting Man in the World would say (yes, it also owns Dos Equis beer), "Stay thirsty, my friends."

Sure, Budweiser Is the Biggest Brand in Alcohol, but Can You Guess Who Is No. 2? @themotleyfool #stocks $BUD $HEINY $MDLZ $KO $DEO $BF.B $PEP $PG $BF.A Next Article
Current