The dramatic downturn in the oil market has had a significant impact on National Oilwell Varco's (NYSE:NOV) financial results for the past several quarters. But with oil prices seemingly finding their footing in recent months, leading to a slight rebound in drilling activities, the company's results should start to look better. That improvement is one of three things that investors will want to look for in its third-quarter report on Thursday morning.

Did results reverse as expected?

National Oilwell Varco's finances have been on a steady decline for more than a year: 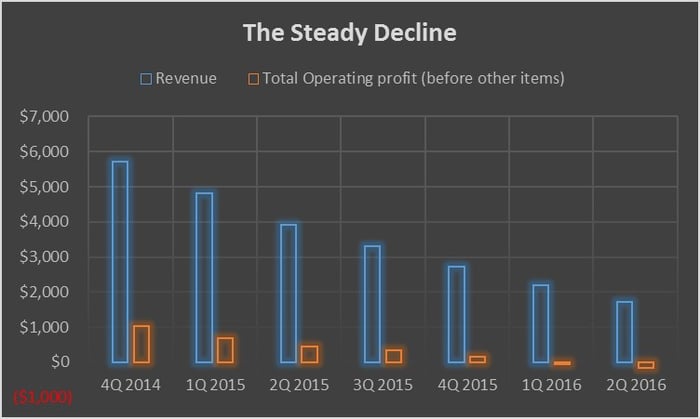 During the second quarter, revenue, which slipped 21% over the prior quarter, is now down 56% year over year. Meanwhile, its operating loss deepened. Driving these declines, according to CEO Clay Williams, was the fact that "global oilfield spending again fell sharply following the crude oil price bottom we saw in February." Those weak conditions forced the company to continue to aggressively cut costs and restructure its operations to "match this market reality."

That said, crude oil prices and the U.S. rig count started to rebound late in the second quarter: 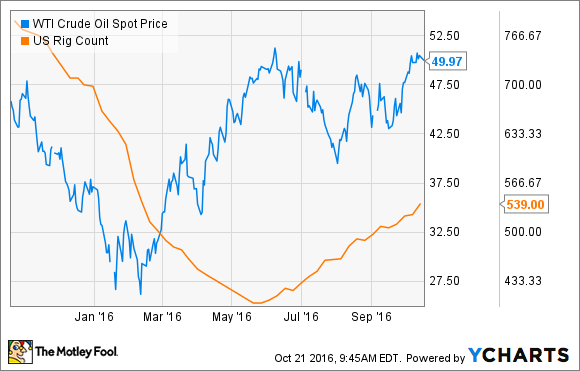 Due to that rebound in activity, CFO Jose Bayardo gave the following forward guidance on the company's second-quarter conference call:

For the third quarter, we expect revenue to increase around 10% as we execute on certain large projects booked earlier in the year and see continued improvement in our production-related businesses. We should see 30% incrementals on the increase in revenue, and we expect to realize an additional $10 million benefit from the ongoing cost savings and efficiency enhancing initiatives which are occurring across the segment.

In other words, National Oilwell Varco expects a sharp rebound in revenue, margins, and earnings during the quarter. Given those expectations, investors should look to see if the company's outlook was on target. If not, find out what went wrong and what the company is doing to address the situation.

Keep an eye on the outlook

Despite forecasting an improvement in its third-quarter results, National Oilwell Varco offered a tepid outlook for a sustainable recovery in sales. That is after Bayardo said on the call:

With the average price for WTI still hovering below $50 a barrel during the quarter, new order intake remains soft. While certain operators have slightly increased activity related to working down the inventory of drilled but uncompleted wells in the U.S., it has not yet translated into an increase in activity for our well intervention and stimulation business and other completion-related offerings. But conversations regarding the plans to step up activity have increased.

Since then, oil has improved a bit more and recently was slightly over $50 a barrel. Furthermore, OPEC has agreed to a framework to cut its output, which could lead to higher prices in the future. Given that improving outlook, check to see if National Oilwell Varco's forecast for sales is improving.

It is worth nothing that oil-field service giants Halliburton (NYSE:HAL) and Schlumberger (NYSE:SLB) both recently gave optimistic views on the future. In Schlumberger's case, CEO Paul Kibsgaard said that he expects onshore activity in North America, the Middle East, and Russia to improve next year, though the company's near-term visibility is limited at the moment because its customers are still in the process of budgeting. Meanwhile, Halliburton CEO Dave Lesar said that he sees a tepid fourth quarter due to holiday and seasonal weather-related downtimes but that the company sees things "getting better for us and our customers."

One thing that National Oilwell Varco clearly intends to do is make acquisitions so that it is positioned to capture the upside of an improving oil market. In fact, it has completed several small transactions and joint ventures already. However, Williams noted at an industry conference during the quarter that the company is considering larger M&A opportunities. It certainly can make a large deal, after ending the second quarter with a $1.7 billion cash balance and a $4.4 billion undrawn credit line. Because of that desire and financial capacity, investors should see if the company announces any more transactions as well as what it has to say about its M&A pipeline and the potential for a transformative deal.

National Oilwell Varco has given its investors a steady stream of bad news over the past several quarters as its financial results continued to deteriorate. However, it is expecting its performance to turn the corner in the third quarter. The hope is that the company not only delivers on those expectations but also has a more optimistic view on the future.