There's no getting around the fact that Chipotle Mexican Grill (NYSE:CMG) had yet another horrible quarter, with revenue down 15% compared with the third quarter of 2015. What you need to keep in mind as an investor, however, is that things are gradually improving.

You can see this most clearly in the slow but steady upward trajectory of Chipotle's same-store sales, which is the single most important metric for investors in the burrito chain to watch as it continues to recover from multiple foodborne-illness outbreaks in its restaurants last year.

You can see this trend in the following chart, which Chipotle included in its third-quarter earnings release: 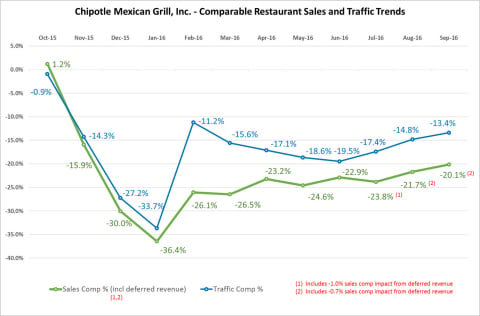 The green line is the one you want to focus on. Before the initial outbreak last October, Chipotle's same store sales were almost invariably positive. They then took a steep dive starting in November and bottomed out in January of this year, when they were off by 36.4% compared to January of 2015.

There's no way to sugar coat the magnitude of this drop. Over the course of a single quarter, Chipotle lost more than a third of its customers. Yet, as has been the case at virtually every other major fast food chain in the United States, including McDonald's, most of which have experienced similar crises, things have gradually begun to improve.

Chipotle's same-store sales jumped in February -- down 26.1%, but meaningful better than the 36.4% drop in January. And the upward march ever since has been slow but steady. In the most recent month, September, comparable sales were down 20.1%.

"Our restaurant teams are very excited to see more customers return to their restaurants, and are working hard to reward them with an excellent guest experience," said co-CEO Monty Moran. "After successfully implementing an industry leading food safety program, and as our marketing efforts are driving more people to our restaurants, it is critical that we are prepared to delight customers on every visit."

Even more promising are Chipotle's expectations going forward on the same-store-sales front. The company expects comp sales to grow in the "low single digits for the fourth quarter" of this year. And next year it's targeting comparable restaurant sales increases in the "high single digits."

It will still take time for Chipotle to make up the ground it's lost over the past 12 months, but I think investors can take solace in the fact that it's headed in the right direction. For what it's worth, Chipotle is one of my and my wife's biggest holdings (purchased post-outbreak) and I intend to add to our position if its stock falls much further from here.