Just because Bank of America's (NYSE:BAC) stock price has climbed more than 50% since bottoming out in February doesn't mean it's too late to buy its stock. In my opinion, there's still significant upside for shares of the nation's second biggest bank by assets. 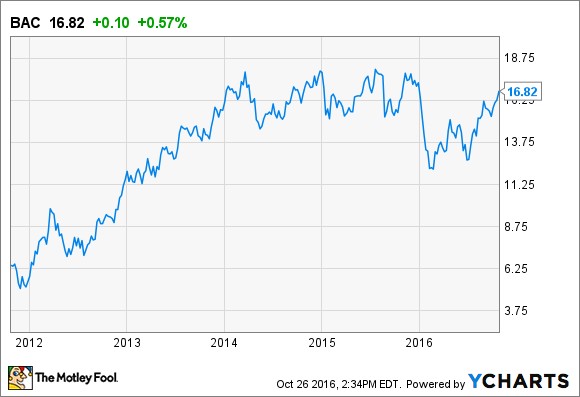 Understanding B of A's sharp climb

Before getting into why Bank of America's shares still seem like a bargain, it's worth looking back on why they've been on a tear over the past eight months. In short, they were bouncing back from a sharp decline at the beginning of the year.

You may recall that 2016 started off on the wrong foot. Oil prices dipped below $30 a barrel for the first time in more than a decade. This was good for consumers, but bad for banks, such as Bank of America, that lend money to companies in the energy sector. 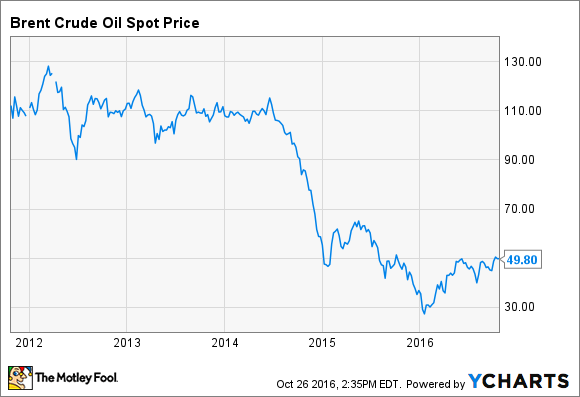 Low energy prices make it hard for oil and gas companies to service their loans, leading to higher defaults. Bank of America responded by boosting its provision for loan losses in the first three months of the year by 20% compared to the same period in 2015. As the bank noted in its earnings release that quarter, the $457 million increase in provisions in its global banking unit was driven "primarily by increases in energy-related reserves."

In addition to concern about the energy sector, there was also considerable geopolitical uncertainty that weighed on stocks early in the year. Most of this stemmed from the United Kingdom's announcement in January that it would hold a referendum in June over whether to exit ("Brexit") the European Union.

Few people believed that voters in the U.K. would vote in favor of such a (small-f) foolish move, but a majority of them did, which sent Bank of America's shares tumbling again in June. It's from these shocks, in turn, that the North Carolina-based bank's shares have been recovering ever since.

A bet on interest rates

It would have been ideal if you took advantage of these setbacks and bought into Bank of America's shares at the time. But even if you didn't, there's still plenty of reason to believe there's a lot upside left if you were to take the plunge now.

I say that for two inter-related reasons. The first is that Bank of America's shares trade for a 30% discount to book value. That makes it the second cheapest bank stock on the KBW Bank Index, which tracks shares of two dozen blue-chip bank stocks. The only major bank that trades for a lower valuation is Citigroup.

But the main reason Bank of America is struggling in this regard has less to do at this point with its own operations, and more to do with the ultralow interest rate environment. Once rates rise in earnest, and it's only a matter of time before they do, then Bank of America will make a lot more money. 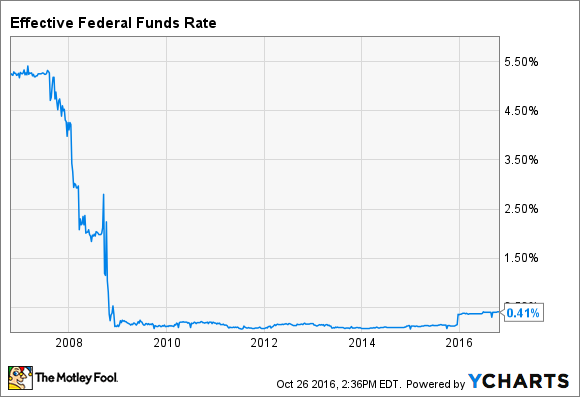 According to the bank's latest estimate, if rates rise by only 100 basis points, or 1 percentage point, it will earn $7.5 billion more in annual net interest income. That's a lot of money when you consider that its quarterly earnings right now are less than $5 billion.

Thus, a bet on Bank of America is a bet on interest rates. And at least if you ask the likes of Jamie Dimon, the CEO of JPMorgan Chase and one of the smartest bankers alive today, there's reason to be optimistic that a rate hike by the Federal Reserve is in the cards in the near future.