Philip Morris (NYSE:PM) stock is paying a remarkably attractive dividend yield of 4.3%, this is substantially above average, and it can be a considerable temptation for investors, especially since it comes from a company which has consistently increased dividends over the past several years. Nevertheless, tobacco is a very particular industry, and dividend payments from Philip Morris are riskier than they seem to be at first sight.

A dividend powerhouse in the tobacco sector

Philip Morris owns the rights to the tremendously powerful Marlboro brand outside of the U.S. and China. Brand recognition provides pricing power to the business, and its massive scale generates cost advantages for an industry juggernaut like Philip Morris. Besides, tobacco companies face serious regulatory limitations when it comes to marketing and advertising, so expenses in this area have substantially declined over the past several years.

The company generates impressive profitability, Philip Morris enjoys operating profit margins in the range of 38% to 40% of revenue. Free cash flow over the last 12 months amounted to nearly $6.4 billion, around 24% of revenue during the period. Demand for cigarettes tends to be remarkably stable through the ups and downs in the business cycle, and this resiliency is a key advantage when investing in dividend stocks. 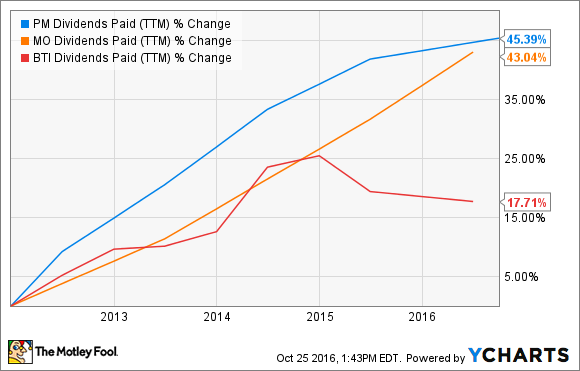 On the other hand, dividend growth has substantially slowed down over the past two years. The company raised quarterly dividends by $0.02 per share both in 2015 and in 2016, first from $1 to $1.02 per share, and then again to $1.04 per share. In percentage terms, this represents an anemic dividend increase of 2% year over year.

Philip Morris doesn't have much room to continue to raise dividends from current earnings, so the company needs to generate growing earnings and cash flows to sustain dividend growth in the future. The main financial metrics are still moving in the right direction, but long-term sustainability is an important concern.

Revenue during the third quarter of 2016 amounted to $19.9 billion, growing by 2.6% year over year. Net revenue excluding the impact from excise taxes and foreign exchange fluctuations increased 3.6% versus the third quarter of 2015, and adjusted operating income excluding currency fluctuations grew 4.3% during the quarter. These numbers are not too dismal at all, but cigarette sales volume are declining, and this could materially hurt financial performance sooner or later.

Cigarette shipment volume was 207.1 billion units during the third quarter of 2016, down by 5.4% year over year. In the first nine months of 2016, shipment volume amounted to 612.4 billion units, declining 3.9% versus the same period in 2015. Similarly, management is expecting the volume drop during the full year 2016 to be in line with the 3.9% decrease the business has experienced in the first three quarters.

The decline this year is accelerating versus a decline of 1% in shipment volume during 2015, and there is no reason to expect industrywide volume to start growing again in the near future. Philip Morris and other industry players are compensating the decline in volume with rising prices, but it's hard to tell for how long tobacco companies can get away with this strategy. You just can't raise prices indefinitely, especially in the context of declining demand volume.

E-cigarettes can provide opportunities for sales growth in the mid-term, but this business is still too small in comparison to traditional cigarettes. Besides, many consumers use e-cigarettes to quit smoking over time, so it's hard to envision a future in which tobacco companies can drive sustainable sales growth thanks to e-cigarettes.

Until, or unless, Philip Morris proves to investors that it has a viable strategy to generate sustainable growth in revenue and cash flow over the long term, I would stay away from the company and its unhealthy dividend.