Established in 2004, and publicly traded since its IPO in July 2005, Silver Wheaton (NYSE:WPM) bills itself as "the largest pure precious metal streaming company in the world." 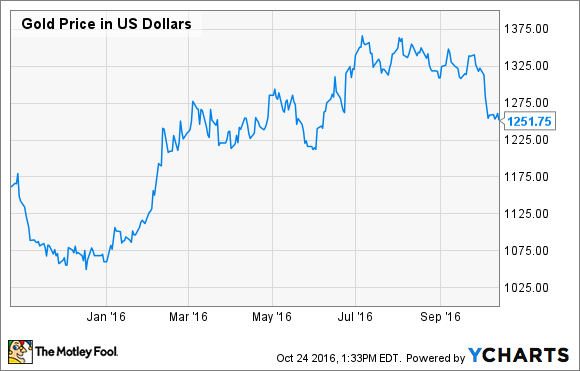 A rising gold price has been nice to Silver Wheaton's stock. Gold Price in US Dollars data by YCharts.

Investors adore the stock, which has run up 70.5% in value over the past year. And yet, despite more than a decade on the public markets, and a strong run in stock price this past year, Silver Wheaton stock has never once split its stock.

Which of course begs the question, will it ever?

Who is Silver Wheaton?

My Fellow Fool Sean Williams, a confirmed lover of "shiny rocks" stocks, describes Silver Wheaton's business model thusly: It "provides upfront capital for mining companies to develop or expand new or existing mines. In exchange for providing this capital, Silver Wheaton receives long-term or life-of-mine contracts that allow it to purchase silver, gold, and certain other byproducts at well below spot value."

How far "below," you ask? Well, as Sean points out, last quarter Silver Wheaton paid just $401 an ounce to take ownership of gold purchased from its suppliers, and $4.46 per ounce for silver. One glance at the chart above, or at this one below, should suffice to tell you just how very profitable this business model can be for Silver Wheaton. 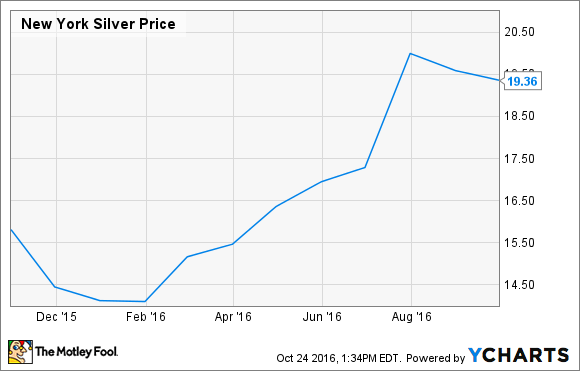 When you see the profit potential for Silver Wheaton, and see, too, the vast profits that investors have reaped from owning Silver Wheaton stock as its price has run up this past year, the question naturally arises: When will Silver Wheaton decide it's gone high enough, and split its stock to keep it looking "affordable"?

That's not easy to answer. In contrast to stocks such as Amazon.com, Corning, and Disney -- which have had split prospects we've gauged in this series -- Silver Wheaton has no track record of having conducted splits in the past. It's given us no insight into what price it "likes" to split at, so as to better gauge the chance of its splitting its stock again. That said, we can take an educated guess based on the following:

Silver Wheaton stock has run up a lot over the past year, but at the same time, it's nowhere near its all-time highs. According to data from Yahoo! Finance, Silver Wheaton's current stock price of $23 and change is barely half the $40 price the stock fetched just four years ago, in October 2012. It's even further below its all-time high of better than $43, set one year earlier in 2011.

If Silver Wheaton didn't split its stock back then, it seems unlikely it would see any advantage in splitting its stock at an even lower price today.

And the future may not help either

Consider, too, the longer-term trends in metal pricing. Both gold and silver prices are up strongly in this emotional, and unsettling election year. Still, longer-term trends suggest that the very high valuations both gold and silver reached earlier this decade (in 2012, silver prices moved well into the $30-an-ounce range, while gold prices spiked toward $2,000 an ounce) are now on the wane.

Should the recent revival in precious metals prices abate as the dust settles post-election, Silver Wheaton's profits might well sink along with them. That would not be good news for the stock price. Should Silver Wheaton's stock return to plumb the near-$10 depths it reached as recently as this past January, a 2-for-1 stock split could leave Silver Wheaton trading at "penny stock" levels -- which might scare off institutional investors that are unable to invest in stocks trading below certain levels.

For these reasons, I do not see much chance of Silver Wheaton conducting a stock split in the near term. The good news, however, is that that's OK.

Some investors like the idea of stock splits, arguing that by adding liquidity to a stock's float, and lowering its apparent price, splits make stocks look more attractive to investors, inciting more buying, and driving the price higher after a split. Broadly speaking, however, splits do not affect the value of the underlying company that split its stock. Whether or not Silver Wheaton decides to capitalize on its recent run-up with a quick stock split, long-term investors in the company should not suffer either way.