Shares of Acacia Communications (NASDAQ:ACIA) slumped on Thursday following a disappointing report from one of its largest customers, ZTE Corp. (OTC:ZTCOY). At 12 p.m. EDT, the stock was down about 12%.

ZTE reported third-quarter operating revenue of 23.8 billion yuan, up 5.23% year over year but well below the average analyst estimate of 26.3 billion yuan. With ZTE accounting for such a significant portion of Acacia's revenue, it's not surprising that the stock took such a large hit on the news.

Since going public earlier this year, shares of Acacia have been volatile. The stock initially surged in its first few months as a public company, but some of those gains have now been lost. 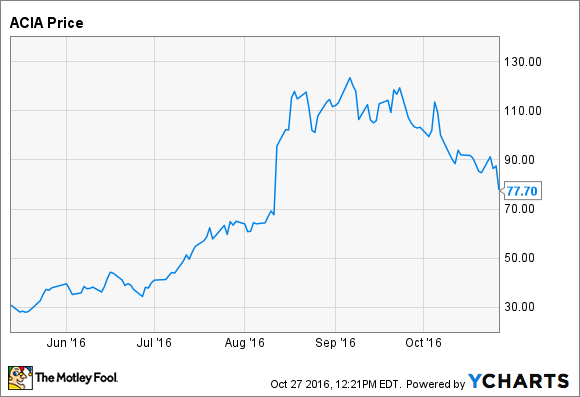 Acacia trades for about eight times trailing-12-month sales, a valuation that bakes in substantial growth expectations. With Acacia highly dependent on a small number of customers, further shocks in the future are certainly possible.