Shares of Bank of America (NYSE:BAC) have climbed steadily since the end of June and are once again approaching a significant threshold. Trading for more than $17 per share, the nation's second biggest bank by assets will soon be valued at roughly even to its tangible book value per share.

At the end of the third quarter, which concluded on Sept. 30, Bank of America's tangible book value per share sat at $17.14. That's just over the $17.08 that its shares are trading for right now, roughly halfway through Thursday's trading session.

This isn't the first time since the financial crisis that Bank of America's shares have flirted with this psychologically important threshold. In fact, it has eclipsed the mark five times since the beginning of 2013.

The difference now, however, is that Bank of America's tangible book value has grown considerably over the past three and a half years. In the first quarter of 2013, it was $13.36 per share. The figure has thus increased by an impressive 28% in the intervening period. 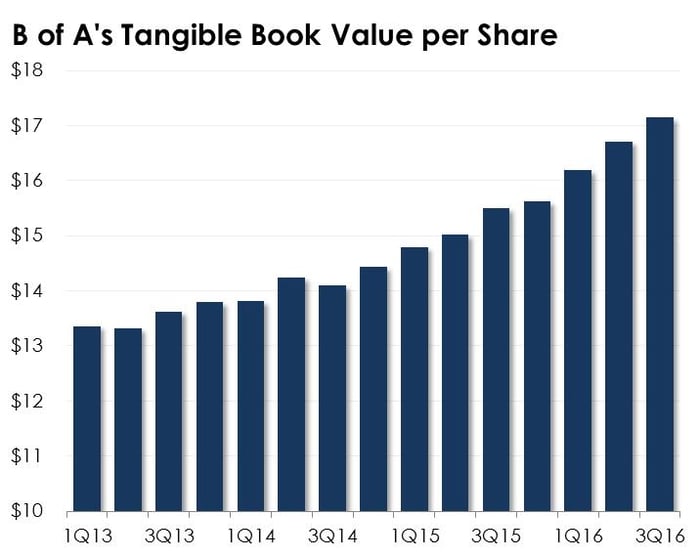 It remains to be seen if/when it will in fact cross the threshold, and even more importantly, whether Bank of America can sustain that valuation. In all five of the preceding times that its share price passed the mark in the past, it dropped back below it soon thereafter. This suggests that investors perceive its tangible book value per share to be a high-water mark for the North Carolina-based bank's stock.

Can B of A's shares sustain a higher valuation?

The good news is that this perception could soon change. And what would cause it to change is an increase in interest rates.

I feel as if I've talked ad nauseam over the past few years about the importance of higher rates for banks. But they really are critical. Indeed, as I've noted more recently, a bet on banks right now boils down to a bet on interest rates.

If interest rates rise, Bank of America will make a lot more money. An increase of 100 basis points, for instance, will translate into an added $7.5 billion in annual net interest income for the bank, according to the bank's latest forecast (see here, page 107).

That would go a long way toward solving Bank of America's profitability problem, which is the reason that its shares trade for a discount to tangible book value in the first place. Its return on assets in the most recent quarter came in at 0.9%. That's below the 1% that investors expect from banks its size.

A rate rise, in other words, is the very thing that would allow Bank of America's shares to sustain a valuation above that mark. It would, in effect, raise the ceiling on the bank's stock price.

The question now is thus whether the Federal Reserve will be inclined to raise rates anytime soon. And I think there's reason to believe that it will. It did so last year around this time. And the economy has continued to improve.

Jamie Dimon, the CEO of JPMorgan Chase, recently made a strong case in favor of higher rates (by the way, I strongly encourage you to follow that link and watch Dimon's interview, which Warren Buffett called "off the charts"). And just today, bond prices for high-quality government debt dove out of concern for inflation. It's higher inflation, in turn, that the Fed has been waiting on before it felt comfortable boosting rates.

In short, not only are Bank of America's shares approaching a significant threshold, but there's also reason to believe that they could remain at or above that threshold for an extended period of time.