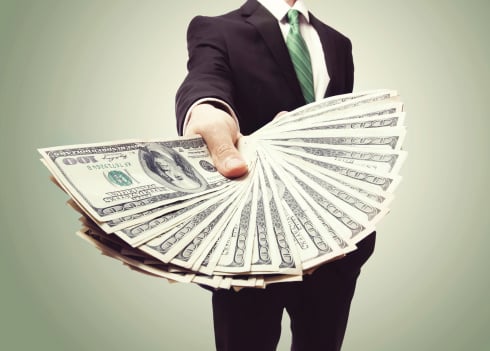 It's a poorly kept secret that dividends are a large driver of stock market returns. Over the past 25 years, the S&P 500 index has provided investors with a nearly 450% return. However, if investors would have reinvested dividends, their pre-tax return would be approximately 80% higher at 810%. With that in mind, we asked a few Motley Fool contributors their favorite dividend stocks to buy in November.

This dividend is as solid as steel

Neha Chamaria: One dividend stock that's caught my attention this month is Nucor Corporation (NYSE:NUE). The steelmaker's recently released third-quarter numbers didn't go down well with the market, as the company missed analyst estimates, but Nucor delivered a solid quarter in reality, with its net income for the first nine months of the year climbing 30% year over year.

With that kind of growth in profits, shareholders can safely expect Nucor to dole out higher dividends going forward. In fact, Nucor isn't any other dividend stock. It's a dividend aristocrat that has increased its dividend for 43 straight years and has paid out a dividend for 174 consecutive quarters now. No other company in its industry boasts such an incredible dividend record. Moreover, Nucor wouldn't be maintaining such a streak given the cyclicality of steel business if it weren't financially strong and stable.

In fact, Nucor's balance sheet is among the strongest in the industry, with limited debt and ample liquid cash. What's more, the steelmaker generated twice as much free cash flow as net income during the trailing 12 months, which is incredible, as a company pays dividends out of its FCF. So there's every chance Nucor will be able to maintain its streak of dividend increases in the coming years. With Nucor offering a juicy dividend yield of 3.2%, income investors should consider the stock's 13% drop in the past three months an opportunity not to be missed.

Microsoft is executing on all levels

Evan Niu, CFA: This might sound a little odd given my obvious bias here, but I'm going to go with Microsoft (NASDAQ:MSFT). The software giant has been firing on all cylinders lately, and much of that is largely thanks to CEO Satya Nadella. For years, investors lacked optimism around the company's future direction, but Nadella genuinely has them excited again, as he has a much clearer strategic vision than his predecessor, Steve Ballmer. We're now seeing Microsoft innovate in hardware in a way that we've quite literally never seen before. At the same time, the core enterprise business is as strong as ever, with Office continuing to crush it on both the consumer and commercial fronts.

As far as the numbers go, Microsoft's yield is fairly modest at this point. Shares yield approximately 2.5% at current prices, but this yield is being pushed down, since Microsoft is at all-time highs. Shares are now even higher than they were during the 2000 tech bubble. But the big difference between then and now is that the valuation is much more compelling, and cash flow far more sustainable. Sure, there are higher yields out there, even within tech, but I think Microsoft currently presents a compelling combination of reliable income combined with reasonable potential for capital appreciation as long as the company continues to execute under Nadella's leadership.

Procter & Gamble may be a boring stock, but it has provided investors exciting returns

Jamal Carnette, CFA: The dividend trade has become quite crowded because of historically low interest rates on bonds and other interest-bearing investments. The key is to find a well-run company committed to paying and raising their dividend, and not simply companies that have raised their dividends to take advantage of current investor sentiment. One dividend aristocrat with an amazing dividend history is Procter & Gamble (NYSE:PG).

The consumer-goods company has paid dividends for 126 consecutive years and has increased its dividend for 60 years straight. In the past 30 years, P&G has kicked its rate of dividend increases into high gear by increasing its per-share payout by 9.8% per year through fiscal 2016, a rate much higher than overall inflation during this timeframe. Currently the company trades at a yield of 3.2%, 70 basis points higher than a current 30-year U.S. Treasury bond.

There's a belief among many investors that a "boring" company like P&G will disappoint as valuations are currently stretched among dividend-paying stocks. Additionally, the company's core products (Tide, Pampers, and Charmin) are in the uninspiring fast-moving-consumer-goods space.

However, the company has averaged an annual total return of 7.8% over the last 15 years, a full percentage point better than the greater S&P during this period. On a one-year basis, P&G has doubled the index by increasing 12.7%, versus 6%. Still, the company trades at a lower price-to-earnings valuation than the overall S&P index.

Shares recently popped on a positive first-quarter report in which the company beat both EPS and revenue estimates while maintaining full-year sales guidance. Procter & Gamble may be considered boring, but its stable of billion-dollar brands should allow the company to continue to pay and raise dividend payments to investors for years to come.

Things are looking up for this large-cap drugmaker

George Budwell: Merck & Co. (NYSE:MRK) is arguably one of most compelling Big Pharma to stocks to own right now because of Keytruda's recent approval as a treatment for front-line metastatic non-small-cell lung cancer (NSCLC). The bottom line is that this single indication has the potential to add around $2.5 billion to Keytruda's annual sales at peak. Moreover, industry experts believe that oncologists will quickly adopt Keytruda as a first-line NSCLC treatment, especially after its main rival, Opdivo, flamed out in late-stage testing for this same indication.

That's certainly welcome news for shareholders, especially since Merck's 12-month trailing payout ratio currently stands at a worrisome 100.55%. In other words, Merck's slightly above-average yield for a major drugmaker of approximately 3% should now be safe. Perhaps most importantly, though, Keytruda's breakthrough for this high-value indication should act as a magnet for large institutional investors moving forward, helping to drive its share price higher. Wall Street, after all, places a high premium on franchise-level cancer drugs, and Keytruda is undoubtedly on its way toward becoming a top-selling oncology product in the near future.

Brian Feroldi: It's rare to find a company that offers up a yield of nearly 4.5% that's also poised for long-term growth, but that's exact what Brookfield Infrastructure Partners (NYSE:BIP) offers investors today.

This company is a publicly traded limited partnership that owns and operates infrastructure assets all around the world. Currently, the company owns electrical transmission lines, ports, toll roads, pipelines, rail lines, and more.

What do all of these assets have in common? They are all one of a kind, are irreplaceable, and require huge amounts of capital to build. That means the company doesn't really have to worry about having a competitor set up shop right next door, which helps make its financial statements highly predictable. In fact, over 90% of its revenue either comes from regulated industries or operates under long-term contracts.

Brookfield's stability allows its management team to pass along an ever-growing stream of profits back to investors. Since 2009, the company's distribution has grown by 12% annually, and there are plenty of reasons to expect another payout bump next year.

While there are potential tax ramifications that need to be considered before buying shares, I think this is a great stock for income-focused investors to consider buying today.