Major benchmarks ended the third quarter on a positive note Monday. The Dow Jones Industrial Average (DJINDICES:^DJI) and the S&P 500 (SNPINDEX:^GSPC) rose in the morning before fading in the final hour. The tech sector led the market, and Chinese stocks made a partial rebound from losses last week. Gold and crude oil prices fell, and shares of companies linked to those commodities were weaker. 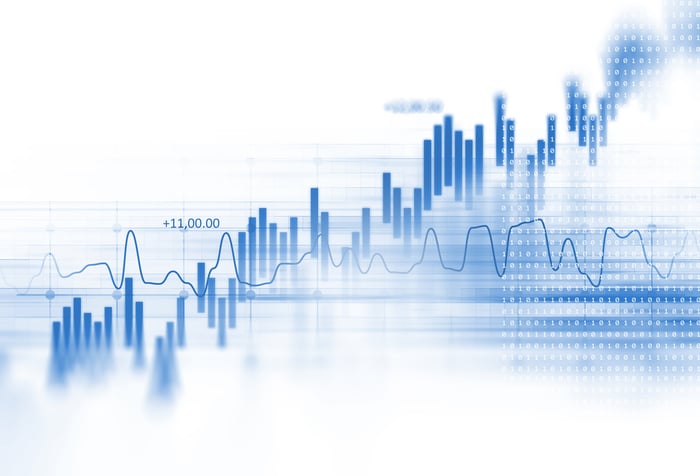 Merck unleashed a torrent of good news for its investors, presenting positive trial results for two of its cancer drugs at the European Society for Medical Oncology (ESMO) meeting in Barcelona and another success for its newest antibiotic. Shares rose 1.5%.

Merck's super blockbuster Keytruda scored two new wins. After a rare failure when pitted alone against chemotherapy in previously treated patients with triple-negative breast cancer (TNBC), data presented at the conference showed that the immunotherapy drug, when administered before and during chemotherapy, increased pathological complete response compared with chemotherapy alone and reduced the risk of progression and recurrence of the disease. A separate study also detailed success for Keytruda in treating endometrial cancer.

The pharmaceutical giant also announced successful trial results for Lynparza, its cancer drug partnered with AstraZeneca. The trials showed it reduced the risk of disease progression or death by 66% in certain men with metastatic castration-resistant prostate cancer, and by 41% in certain women with ovarian cancer.

Recarbrio, Merck's antibiotic for drug-resistant bacteria that's already been approved recently for urinary tract and intra-abdominal infections, succeeded in a phase 3 trial against hospital-acquired bacterial pneumonia and ventilator-associated bacterial pneumonia. Merck will be taking the results to regulatory agencies to seek expansion of its label.

NextEra Energy Partners, a growth-oriented limited partnership formed by utility giant NextEra Energy (NYSE:NEE), announced an agreement to acquire Mead Pipeline in deal worth $1.37 billion. The stock edged up 0.8%. Meade Pipeline owns a 39.2% interest in the Central Penn Line, a 185-mile natural gas pipeline that connects the Marcellus shale region in Pennsylvania with the Mid-Atlantic and Southeastern regions of the U.S.

NextEra Energy Partners said that the deal should yield a double-digit return to the partnership's limited partner shareholders and contribute $60 million to $66 million annually to cash available for distribution. The transaction will be financed by debt and convertible equity.

The deal expands NEP's holdings at a time when there is a shortage of natural gas pipeline capacity. The partnership believes that after the acquisition, it will be able to achieve its long-term distribution growth objective of 12% to 15% without any new acquisitions until 2021.