Technology shares were pounded Monday on reports that federal regulators will be investigating the practices of some big internet companies. The Dow Jones Industrial Average (^DJI -0.38%) and the S&P 500 (^GSPC -1.03%) closed mixed, but the tech-heavy Nasdaq Composite dropped 1.6%.

Two U.S. agencies are reportedly dividing up oversight over the big tech giants, with the Federal Trade Commission possibly investigating antitrust issues at Facebook, while the U.S. Department of Justice will oversee a probe into Google, a unit of Alphabet. The Communication Services Select SPDR ETF (XLC -2.00%), which holds both stocks, plunged 3.1%. 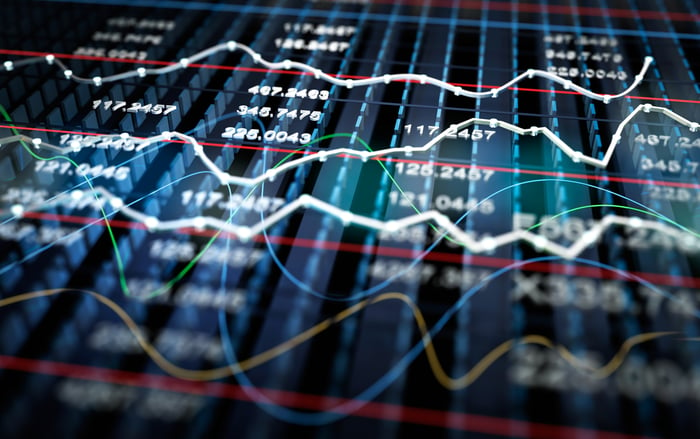 Cypress Semiconductor stock soared 23.9% to $22.07 on the news that it is being bought by German semiconductor company Infineon for $23.85 per share. Infineon stock, trading on the Frankfurt stock exchange, fell 8.1%. The purchase price represents a 46% premium to Cypress' 30-day volume-weighted price prior to May 28, when rumors of the deal made its shares jump. The buyout values Cypress at $8.7 billion.

Semiconductor stocks have come under pressure recently as investors worry about the impact of Chinese tariffs and a slowing of global growth. But Cypress has been transforming itself to focus on two areas expected to generate outsize growth in coming years: microcontrollers for the automotive sector and the Internet of Things (IoT). These are also strategically important markets for Infineon, whose CEO, Reinhard Ploss, said, "With this transaction, we will be able to offer our customers the most comprehensive portfolio for linking the real with the digital world."

Shares of NXP Semiconductor, which is pursuing the same markets, also rose, closing up 1.7%.

The data, presented at the American Society of Clinical Oncology annual meeting, was a follow-up from Merck's first trial of Keytruda in advanced non-small cell lung cancer (NSCLC). It showed that the anti-PD-1 therapy, used alone, resulted in a five-year overall survival (OS) rate of 23.2% in 101 patients who were receiving the drug as a first-line treatment. The OS rate was 15.5% in 449 patients that had previously tried chemotherapy. Five-year survival for NCLSC, the most common form of lung cancer, has historically been about 5%. Among the 60 patients who received two years or more of Keytruda treatment, the five-year OS rate was 78.6% in treatment-naive patients and 75.8% in previously treated patients.

The results extend Merck's dominance with Keytruda, which has been approved for a wide variety of cancers, including melanoma, lymphoma, and cancers of the lungs, liver, kidneys, bladder, cervix, and stomach.