Honda's small HR-V crossover has been a big seller in both the U.S. and China. Image source: Honda Motor Company.

Honda Motor Company (NYSE:HMC) said on Monday that its net profit for the quarter ended Sept. 30 rose 39% from a year ago to 177 billion yen ($1.7 billion) -- despite a drop in revenue caused largely by the rising value of the yen.

The chart below, provided by Honda, shows how its results for the quarter ended Sept. 30 compare with the year-ago period. Note that Honda's fiscal year starts on April 1; the most recent quarter is the second quarter of its 2017 fiscal year. 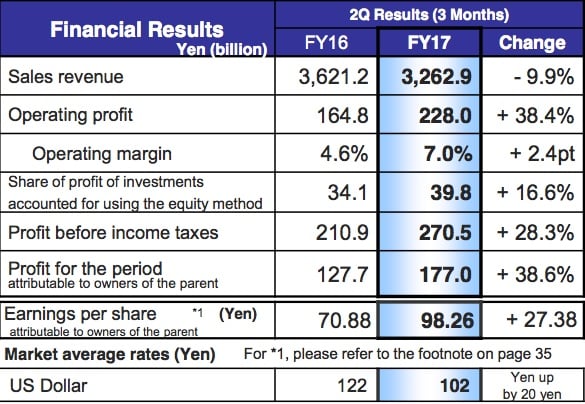 What happened at Honda during the quarter

Despite the nearly 10% year-over-year decline in revenue, it was a good quarter for the Japanese automaker. Honda attributed the revenue drop to unfavorable exchange-rate movements, particularly the increase in value of the yen versus the U.S. dollar.

But nearly every other indicator was strongly positive. Sales of Honda's automobiles and motorcycles rose 6.9% and 3.8%, respectively, with only the company's relatively small power products unit posting a sales decline (-2.7%).

Honda has long relied on steady global demand for its mainstay Fit, Civic, and Accord sedans. Over the last couple of years, the company has suffered as consumer tastes have shifted toward car-based "crossover" SUVs. But more recently, Honda has been able to recover by boosting production of its own popular HR-V and CR-V crossovers to meet surging demand. Demand has been especially strong in China, where Honda's vehicle sales were up 26% through the first nine months of 2016.

What's more, those sales were very profitable ones. Honda was able to post a big jump in profit despite the exchange-rate pressures because of a substantial improvement in profitability. Its operating margin rose 7% from 4.6% a year ago thanks to increased sales and a more favorable "mix" of products, a series of cost reduction efforts, and a favorable change in its pension accounting.

Honda's year-over-year comparison also benefited from a decrease in expenses related to the massive global recalls of defective airbags made by the Takata Corporation. Honda set aside a total of 556 billion yen ($5.29 billion) over the past two years to cover costs related to the Takata recalls.

The exchange-rate shifts and Honda's improved profitability led the company to revise its guidance for the full fiscal year that will end on March 31, 2017, with somewhat lower expectations for revenue but higher forecasts for profit.

Honda also said that it now expects its overall auto sales to be up 5% from last year, to 4.98 million vehicles, driven by an 11% increase in sales in Asia (excluding Japan).