October was a good month for Bank of America (NYSE:BAC) investors. Shares of the nation's second-biggest bank by assets rose 6.6% through the month, outperforming its closest competitors JPMorgan Chase, Citigroup, and Wells Fargo. 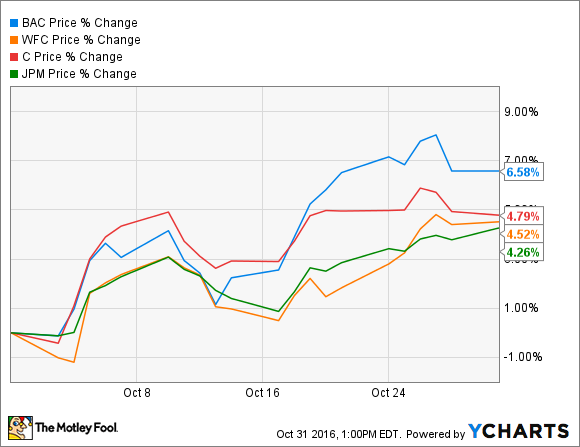 Shares of the bank were primed to continue rebounding after dropping steeply to begin the year.

Its stock bottomed out in February, at just about the same time that oil prices dipped below $30 a barrel. This wasn't a coincidence, as the low prices made it difficult for energy companies to service their bank loans. This led Bank of America to increase the amount of money it set aside in the first quarter in anticipation of future loan losses.

It was around the same time that the United Kingdom announced that it would hold a referendum in June to decide whether to remain as a member in the European Union. This triggered uncertainty in the markets, which resulted in a 16% drop in Bank of America's first-quarter trading revenues. Bank stocks fell again in June in the wake of the vote, which came out in support of leaving.

By the time third-quarter earnings rolled around last month, Bank of America's investors were looking for any reason to conclude that its otherwise dismal performance for the year would improve. And that's exactly what they got.

As I discuss here, almost all of Bank of America's headline metrics went in the right direction in the three months ended Sept. 30. Revenue was up 3% on a year-over-year basis, thanks to higher interest and noninterest income. Expenses at the $2.2 trillion bank were down. And its net income came in 7% above the same quarter in 2015.

Investors responded by sending Bank of America's shares higher, as they did with most other bank stocks. Since reporting earnings on Oct. 17, the North Carolina-based bank's share price has climbed 4.3%.

The good news for enterprising investors is that there's still a lot of fuel in the proverbial tank when it comes to Bank of America's shares, as they continue to trade for a 31% discount to book value, making the stock the second-cheapest blue chip bank stock after Citigroup.

The true game changer will be higher interest rates, which could very well be in the works for later this year, if JPMorgan Chase CEO Jamie Dimon is right. According to Bank of America's third-quarter earnings presentation, a 100-basis-point increase in short- and long-term rates will translate into $5.3 billion more net interest income over the next 12 months.

That would go a long way when you consider that Bank of America earns less than $5 billion a quarter -- its earnings last quarter were $4.96 billion. This would also consolidate the improvement in Bank of America's profitability, which has stabilized at 10.3% of its tangible common equity, suggesting that the bank is on the precipice of generating value for shareholders after taking into account the opportunity cost of owning its shares.

It remains to be seen whether Bank of America can continue its momentum through the end of the year, but either way, it's headed in the right direction.