The all-new 2018 Volkswagen Atlas is a seven-passenger SUV designed for the U.S. market. It will go into production at VW's Chattanooga, Tennessee, factory next spring. Image source: Volkswagen.

Volkswagen (OTC:VWAGY) took the wraps off of its all-new 2018 Atlas late last week. The Atlas is a big SUV that VW hopes will revive its fortunes after several years of declining sales in the U.S. market and a costly diesel-emissions cheating scandal.

What it is: A family-friendly SUV aimed at the U.S. market

"This is the biggest and boldest Volkswagen we have ever built in the United States, delivering the distinctive design and craftsmanship we're known for, now with room for seven," Hinrich Woebcken, CEO of Volkswagen's North America unit, said in a statement. "The Atlas marks a brand-new journey for Volkswagen to enter into the heart of the American market."

At almost 199 inches in length, the Atlas is big for a VW -- in fact, it'll be the biggest VW Group vehicle yet built on the scalable MQB architecture that underpins the Golf and other models. It has seating for seven passengers in three rows, making it a direct competitor to big-selling models like the Ford (NYSE:F) Explorer, Honda (NYSE:HMC) Pilot, and Toyota (NYSE:TM) Highlander.

VW hasn't yet released pricing, but it said that the Atlas will be available in five trim levels that will be "priced for the heart of the competitive SUV market." Two engines will be offered, neither of which are diesels: A 2.0 liter TSI turbo four cylinder making 238 horsepower, and the 3.6 liter VR6 V6 with 280 horsepower. Front wheel drive will be standard; all-wheel drive will be optional on V6-powered models.

The Atlas will be built at VW's sole U.S. factory, in Chattanooga, Tennessee.

Two charts show why the Atlas is key to VW's U.S. hopes

Here are two charts that show why VW is building the Atlas -- and why it needs the new SUV to be a success if the brand is to return to growth in the United States. 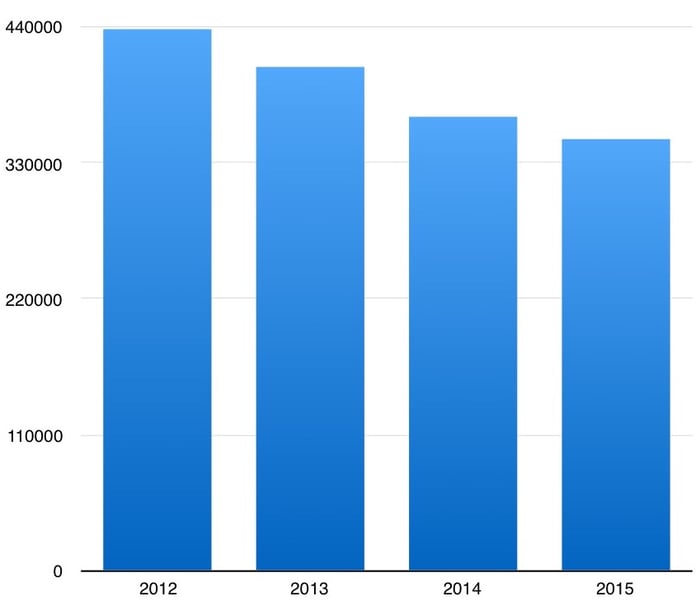 As we see in the second chart, the explanation for that drop is pretty simple: VW has so far mostly missed the SUV boom. VW has two SUVs, but they're not competitive with mass-market rivals and they've sold poorly here.

The chart compares the VW brand's total U.S. sales of "light trucks" with those of the Explorer, Highlander, and Pilot. These totals include the VW Touareg and Tiguan SUVs as well as the Routan minivan. 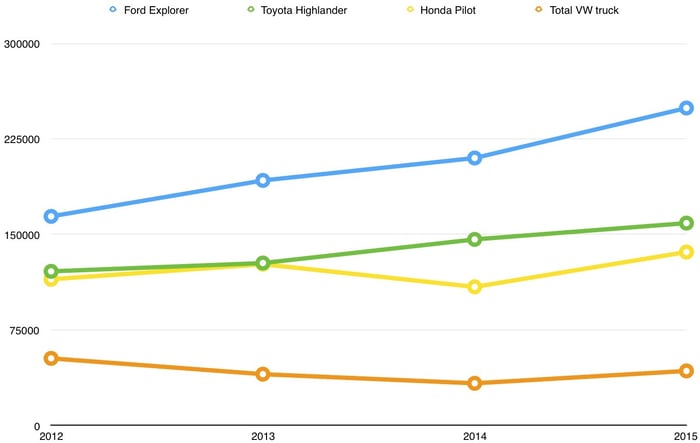 VW's total SUV (and minivan) sales in the U.S. haven't been anywhere close to the sales of any of the three competitors it has targeted as rivals for the Atlas.

Long story short: If VW wants to turn around its flagging fortunes in the U.S., a family-size crossover SUV will be essential. That makes the new Atlas a critical product.

VW hasn't said what the new Atlas will cost

Pricing (and fuel economy ratings) will be announced closer to the Atlas's launch next spring, the company said. Until we see the pricing, it's hard to gauge the Atlas's chances.