Cypress Semiconductor (NASDAQ:CY) recently announced it's laying off 500 employees, or about 8% of its global workforce. After last year's merger and an acquisition this past July, the company has swung to a net loss so far in 2016. Here's what investors need to know about the cuts.

Cypress on the move

Cypress has been in the news often since company founder and longtime CEO TJ Rogers retired earlier in the year. New CEO Hassane El-Khoury was announced back in August, and rumors surrounding his strategy for the company have been circulating ever since.

In 2015, Cypress completed a merger valued at $5 billion with rival chipmaker Spansion in an effort to consolidate the businesses and save on overhead costs. Then in July of this year, the Internet of Things division from Broadcom was purchased for another $550 million. The moves make Cypress the world's largest IoT chipset provider, and El-Khoury was reportedly involved with both deals.

After the big merger and acquisition moves, it should come as no surprise that the company is now looking to cut costs. Besides setting itself up for long-term growth, management has stated that streamlining operations and cost savings were at the heart of the takeovers. Cypress expects to incur charges of $40 million to $50 million during the next two quarters as a result of the layoffs, but investors will want to key in on the longer-term benefits.

How the cuts will help the company

Through the first six months of the year, Cypress had racked up $623 million in losses mostly because of the past year's buyout activity. With that as a backdrop, it makes sense that the company would be looking to slash its workforce to bring expenses down and move toward profitability again. During the third quarter just reported last week, the company returned to profitability on the back of cost savings initiatives.

Another possible reason the company might be making the move to reduce its workforce, though, is that Cypress itself may now be a takeover target. Shares spiked in the late summer and fall on rumors that the company was entertaining offers from several private firms. Management has not taken time to address the reports in detail, but apparently the offers were rejected. 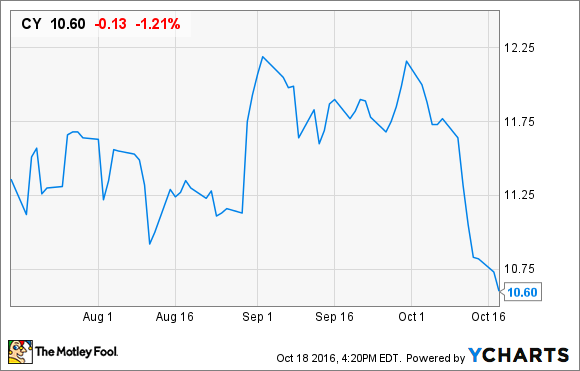 The decision to streamline the workforce and reduce expenses as a result could sweeten the deal if Cypress decides to consider any offers again in the future. In the meantime, though, the chipmaker says the cuts will help the business refocus on its new higher-growth areas in connected automobiles and other devices.

During the last quarter just reported on last week, Cypress saw revenue and profitability come in near the high end of previously stated guidance. Highlights included better-than-expected revenue from the new IoT division from Broadcom and continued cost savings from the Spansion merger. While streamlining business expenses continues to be a focus, new CEO El-Khoury also talked about Cypress' new period of transition where focus will be on high-growth markets like connected automotive and the software that runs connected machines.

Investors will want to keep an eye on how the cost saving from the layoffs play out in the bigger picture.